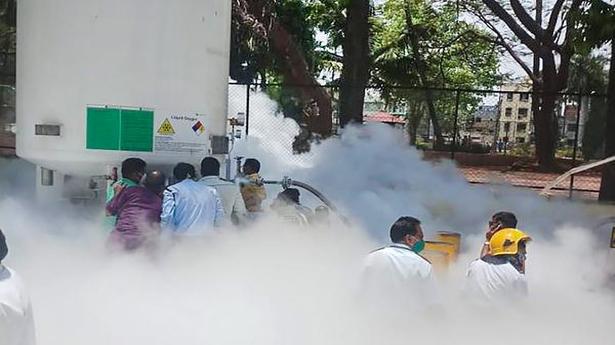 At least 24 COVID-19 patients died on life support after a leak in a medical oxygen tank disrupted the gas supply at Dr. Hospital. Zakir Hussain in Nashik, Maharashtra, on Wednesday.

Attributing the leak to valve malfunction, State Health Minister Rajesh Tope said a high-level investigation had been ordered to find out if the tragedy had been caused by negligence.

Sources said the tragedy unfolded around 10 am when the tank was refilled after the oxygen level dropped. The massive leak caused a disruption in the vital oxygen supply for at least half an hour. A fire brigade team had to be rushed to hospital to catch the spill.

Mr Tope said 61 of the 157 patients hospitalized were in critical condition and needed oxygen.

Maharashtra Chief Minister Uddhav Thackeray, expressing grief over the incident, announced a thorough investigation. “The relative of every patient who died will receive compensation of ₹ 5 lakh. I appeal to the people not to get involved in any kind of politics, ”he said in a statement.

Mr Thackeray said the tragedy showed the need to be careful in the fight against the pandemic. “We have been facing the pandemic for over a year now and the doctors and medical staff available are working day and night to save patients’ lives… Such incidents should not happen in the future. The administration will have to work very carefully to prevent any such incidents that could erode the morale of health personnel, ”said Mr Thackeray.

The First Minister said he had instructed the First Secretary to immediately investigate and determine responsibility so that hospitals in no other area could report oxygen leaks.

Nashik Collector Suraj Mandhare said the tank belonged to a private seller. “Technicians apparently tried to repair the valve when the low pressure caused the leak. This resulted in the deaths of 22 critical patients who were on ventilator support. My deepest sympathies to the deceased’s relatives, ”he said.

Acknowledging the anger and grief felt by the deceased’s relatives, the Collector encouraged people to keep restraint and ensured a thorough probe was in progress.

“The other patients are currently getting oxygen from the repaired tank. They are in a stable condition, according to medical authorities, ”said Mr Mandhare.

Chaotic scenes erupted at the hospital site as relatives of patients gathered at the scene of the tragedy. They accused the Nashik Municipal Corporation authorities of not providing them with accurate information about the incident.

Prime Minister Narendra Modi ing expressed over the event. “The tragedy at a hospital in Nashik due to oxygen tank leaks is encouraging. Worried by the loss of lives as a result. Condolences to the bereaved families in this sad hour, ”he tweeted.

Union Home Minister Amit Shah and Congress leader Rahul Gandhi also sympathized with the deaths of the patients. Mr Gandhi urged the Maharashtra government to give all the help to those affected.

The tragedy comes at a time when Maharashtra, the worst hit State in India for COVID-19 cases and deaths, is desperate for a severe shortage of oxygen.

Shiv Sena local leader Sudhakar Badgujar, who was among the first to reach the scene of the crash, expressed fears that the death toll could rise.

Opposition Leader Bharatiya Janata Party (BJP) at Legislative Council Pravin Darekar said the negligence of the Nashik municipal body was to blame for insisting on a felony manslaughter case against the NMC Commissioner. “This tragedy cannot be blamed solely on technicians. The NMC authorities and the State government are equally to blame for this, ”said Mr Darekar.

The BJP is in power in the NMC.

The fact that no BJP representative arrived at the scene of the crash soon drew accusations of unprovoked politics on part of the saffron party of several quarters.

“There’s no question playing politics here. Devendra Fadnavis (Leader of the Opposition in the Legislative Assembly) and I are available to people 24 hours a day. In this case, it is clear that the NMC authorities are to blame for negligence, ”said Mr Darekar.

BJP State president Chandrakant Patil said this was not the first time such incidents had been reported in Nashik and across the State. He urged Mr Thackeray and the Maha government to Vikas Aghadi to “get his act together” and ensure that such incidents would not happen again.

Along with Pune, Mumbai and Nagpur, Nashik has witnessed massive outbreaks and COVID-19 related deaths in both waves of the pandemic. The area, which has been recording an average daily spike of 3,000 cases, currently has around 45,000 active cases, while its total death toll is 2,672.