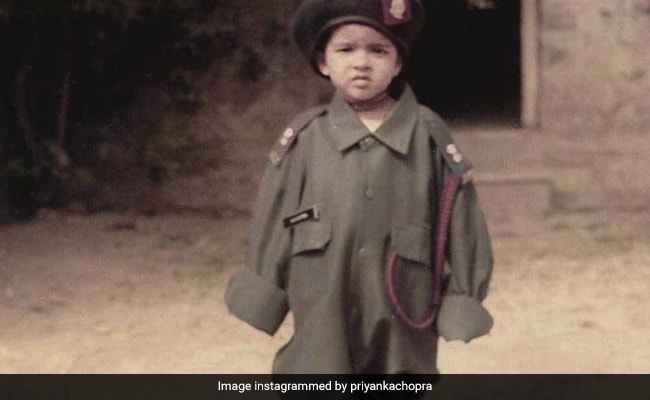 Priyanka Chopra, on Thursday, flipped through her childhood album and posted an adorable photo from when she was a child. The actress will soon release her memoir titled Unfinished, published by Penguin Random House. In her post, Priyanka Chopra shared a page from her memoirs and wrote about the time when she used to follow her late father Ashok Chopra around the house “dressed in his army uniform.” Priyanka Chopra’s parents, Dr. Ashok Chopra and Dr. Madhu Chopra, served in the Indian Army. Sharing the photo, in which you can see “little Priyanka” in her father’s army uniform, the actress wrote: “#TBT to little Priyanka. This is a photo from my next book album. Me I loved to follow my father home in his Army uniform. I wanted to grow up and be exactly like him. He was my idol. “

Priyanka Chopra often remembers her father through emotional posts on social media. On Memorial Day earlier this year, he posted a photo of his parents and wrote: “My parents served in the Indian military … Maybe that’s why I have such an affinity with military families around the world. Today let’s think about all the fallen heroes who have given their lives in service to protect our freedom. Memorial Day. “

On the 70th anniversary of her father’s birth in August, Priyanka Chopra shared an old video that turns out to be from an awards performance, in which Ashok Chopra can be seen picking up the Best Actress trophy on her daughter’s behalf. She wrote: “My cheerleader forever. Today you would have turned 70. I miss you dad.”