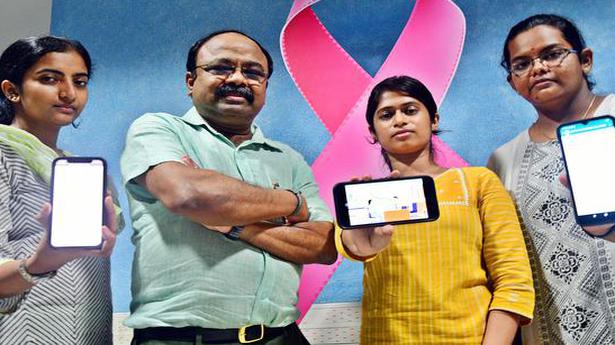 ‘Hi’ over WhatsApp is all that is needed. The answer arrives almost instantly. You are not greeting a person, but a ‘pink bot’. The bot is quick to list nine topics on breast cancer starting with early signs of breast cancer, early diagnosis to treatment modalities, and risk factors. “One can choose either Tamil or English. Using Artificial Intelligence (AI), the bot answers all breast cancer queries, ”said Dr P Guhan, director of the Sri Ramachandra Institute of Oncology and Research (SRIOR), Sri Ramakrishna Hospital.

The pink bot, a chat module integrated into WhatsApp to answer breast cancer queries, is the latest initiative by Dr P Guhan and his team to raise awareness. It was launched to coincide with Breast Cancer Awareness Month, an annual campaign that is also celebrated worldwide in October to raise awareness of the impact of breast cancer.

“The pink ribbon is a symbol of breast cancer awareness. In other countries, airports, railway stations and hotels are decorated in pink lights and tournaments and games are held throughout the month, ”explains Dr Guhan.

The doctor, who has pioneered several online campaigns using apps, e-books, animated videos and websites over the past two decades, adds that volunteers wear pink bands to express moral support for women with cancer breast, adding “In India, we thought the WhatsApp campaign would arrive immediately. ”

To make it interactive, the bot shares two URL options: a bluetooth URL that plays the information as audio and another, which guides the user to a website with animated videos. The prototype has been developed in SRIOR in such a way that it integrates all the features on one platform and users can choose to chat, listen or watch to stay aware. There are videos that contain stories about survivors. ”

The numbers are always on the rise and early diagnosis is the key, Dr Guhan said. “In the Coimbatore region, 28 women per lakh are diagnosed with cancer, which is the second highest rate after Chennai where the number is 50 women per lakh.”

He admits there is still a great fear of the disease and people seek medical help only when the disease has developed. “While in Western countries, more than 80 per cent of cases are diagnosed early and the survival rate is over 90 per cent. In India, more than 50 percent of cases are diagnosed in stage III or stage IV levels and so the survival rate is only 60 percent. ”

Dr Guhan says the diagnosis of cancer among younger women aged 30 to 40 has increased from two percent to four percent in the last 25 years, while in the 30 to 40 age group, the increase is seven percent to 16 per cent. “Early menarche, late menopause, excessive body weight, lack of exercise and alcohol consumption are risk factors. Although 10 percent of cases are hereditary, over 90 percent of cases come from such risk factors that are modifiable and can be fixed with lifestyle changes. They need to be aware to identify the risk factors and take precautions, ”he advises.

Women over 40 should go for an annual mammogram, she said. If detected early, the procedure may not require radiation or chemotherapy. “Anyone over the age of 20 can start with breast self-examination to look for lumps. After they’ve crossed 30, a clinical audit helps, ”said Dr Guhan

Even today, people avoid mammograms for fear. “Cancer is not a death sentence. A breast cancer diagnosis is not the end of life, ”he assures.