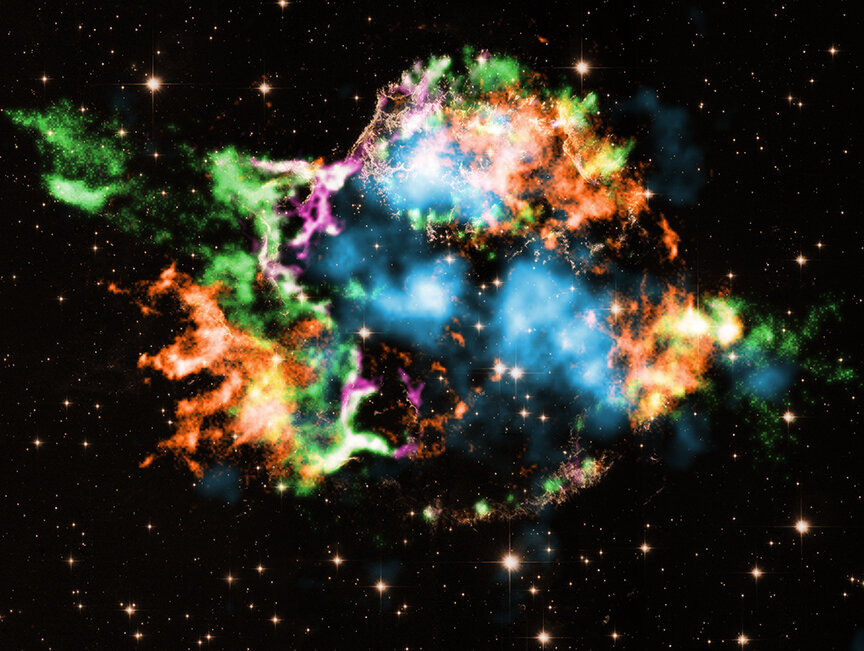 Scientists have found pieces of titanium exploding out of a famous supernova. This discovery, made with NASA’s Chandra X-ray Observatory, could be a major step in identifying exactly how some massive stars explode.

This work is based on Chandra’s observations of a supernova remnant called Cassiopeia A (Cas A), located in our galaxy about 11,000 light years from Earth. It is one of the youngest known remains of a supernova, with an age of about 350 years.

For years, scientists have struggled to understand how massive stars – those with masses over 10 times that of the Sun – explode when they run out of fuel. This result provides invaluable new clue.

“Scientists believe that most of the titanium used in our daily lives – such as electronics or jewelery – is produced in a massive star explosion,” said Toshiki Sato of Rikkyo University in Japan , which led the study appearing in the journal Nature. “However, to date scientists have never been able to capture the moment just after a stable titanium is made.”

When a massive star nuclear power source runs out, the center collapses under gravity and forms either a dense stellar core called a neutron star or, less often, a black hole. When a neutron star is created, the interior of the giant falling star bounces off the surface of the stellar core, reversing the explosion.

The heat from this cataclysmic event produces a shock wave – similar to the sonic boom of a supersonic jet – that races outward through the rest of the doomed star, producing new elements through nuclear reactions as it goes. However, in many computer models of this process, energy is lost quickly and the shock wave’s journey stalls outward, preventing the supernova explosion.

Recent three-dimensional computer simulations suggest that neutrinos – very low mass subatomic particles – made during the creation of the neutron star play a vital role in driving accelerating bubbles from the neutron star. These bubbles continue to propel the shock wave forward to trigger the supernova explosion.

With the new study of Cas A, the team found powerful evidence for such a neutrino-driven explosion. In the Chandra data they found that finger-shaped structures pointing away from the site of the explosion were composed of titanium and chromium, coinciding with iron debris previously found with Chandra. The conditions required for creating these elements in nuclear reactions, such as temperature and density, correspond to bubble conditions in simulations driving the explosions.

The titanium discovered by Chandra in Cas A and predicted by these simulations is a stable isotope of the element, meaning that the number of neutrons in its atoms suggests that it does not change by radiation is a different element , lighter. Astronomers had previously used NASA’s NuSTAR telescope to discover an unstable isotope of titanium at various locations in Cas A. Every 60 years about half of this titanium isotope transforms into scandium and then calcium.

“We have never seen this signature of titanium bubbles in supernova remnants before, a result that was only possible with amazing images of Chandra shark,” said co-author Keiichi Maeda of Kyoto University in Japan. “Our result is an important step in solving the problem of how these stars explode as superpowers.”

“When the supernova happened, titanium pieces were produced deep inside the giant star. The pieces penetrated the surface of the massive star, forming the edge of the remains of Cas A supernova,” said co-author Shigehiro Nagataki of the Cluster RIKEN for Innovative Research. in Japan.

These results strongly support the idea of ​​a neutrino-driven explosion to at least explain some superpowers.

“Our research could be the most important observational result examining the role of neutrinos in the explosion of massive stars since the discovery of neutrino from Supernova 1987A,” said co-author Takashi Yoshida of Kyoto University in Japan.

Astronomers used over a million and a half seconds, or over 18 days, of Chandra’s observation time of Cas A taken between 2000 and 2018. The amount of fixed titanium produced in Cas A is greater than the total mass of the Earth.

Provided by Harvard-Smithsonian Center for Astrophysics