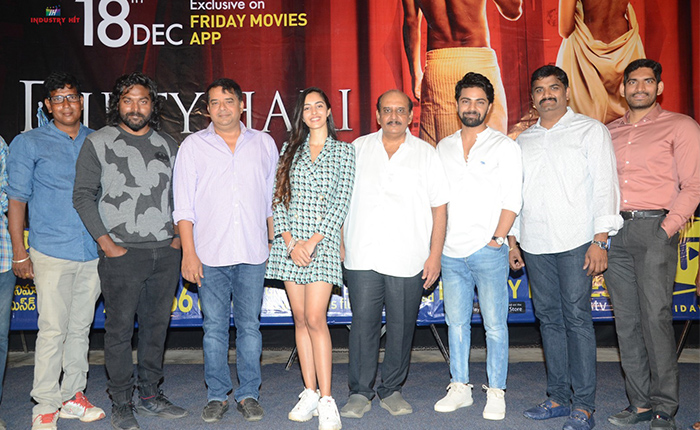 The film is directed by M.S. King said, “The sound you heard in the trailer came exactly as I wanted it to. I found an amazing technician like Robin who understands what a director wants and how with this film. The editor, cameraman and art director who worked on this film all co-ordinated very well with me. The ground work done by Simrat Kaur & Shravan Reddy for their roles is very impressive and they will be very big stars in the future. Our movie will be released on Friday 18th of this month through Friday Movies Online ATT. All you have to do is make a missed call to 7997666666 to download this app. I am ready to answer any questions asked by anyone after watching the movie. Critics all say that day, which is M.S. The king movie is not a whore movie, ”he said.

The head of the Friday Movies app said, “Our app is MS. King Dirty Hari is very happy to launch with the film. After watching the trailer we saw the full movie with expectations on the movie, liked it very much. As the name suggests our intention is to release a film every Friday through our app. We have put a missed call process so that even those in remote areas can use the app. I sincerely want the film to be a great success. ” Said.

Vamsi Karumanchi, one of the producers of the film, said, “We liked the film as soon as we saw it and decided to buy it immediately. The film was directed by M.S. Specials in King Gary’s directing career, as well as Friday Movies are launching with this film. Gudur is Sivarama Krishna’s first film, Highlife Entertainments ‘first film and actress’ first film. But all of us are confident in this film. M.S. As King puts it, this is a New Age romantic suspense thriller that everyone loves. After the release of the film on the 18th, I am confident that everyone will speak in the same positive way at Success Meet. ” Said

Music director Mark K. Robin said, “Unlike what everyone thinks in the poster, only 20% of romance is about life. Image with good surprise. Shravan & Simran have a very good future and have given an excellent performance. Even at this age M.S. The energy in King Gary is inspiring to many, including me. Thanks to all the members of the film, we hope you will respect our film. ”

Heroine Simrat Kaur said, “M.S. I came to Hyderabad to hear that Raju Gary’s movie is definitely a story, and I liked it very much. But for some scenes I was initially embarrassed but M.S. Raju Garu, we did it very easily with the help of Shravan. With the cooperation of everyone this journey looked pretty awesome. After watching the movie, I like Jasmine, my role as well as Dirty Harry. ” Said.

Hero Shravan Reddy said, “M.S. I was very excited to hear King Gary’s story. The director portrays the character between Ramu and Ravana very close to real life. He did it in a genre he had never done before but Youth was very connected. Even at this age, his perseverance in cinema has inspired us all. Simrat acted wonderfully. This film contains all the emotions. Thanks to Highlife Entertainments, producers and technicians for their good support for our film. Be sure to check out our film on Friday Movies Online ATT on the 18th of this month. ”