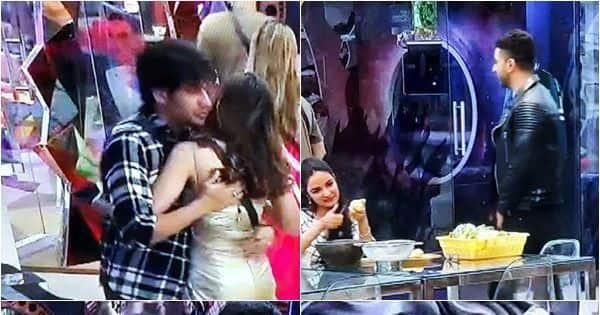 During the final week of Bigg Boss 14, three most beloved contestants, Aly Goni, Nikki Tamboli, and Rahul Vaidya, were eliminated from the show. While Aly left the show for Jasmin Bhasin after losing the assignment, Nikki was evicted for being the recipient of the fewest votes from the audience. Rahul, on the other hand, had voluntarily left the show citing homesickness. Fans were disheartened to see their favorite contestants leave the show, however, the creators brought Aly and Nikki back to the Bigg Boss 14 house without Rahul Vaidya. Also Read – Bigg Boss 14, Day 60, Live Updates: Rakhi Sawant, Aly Goni, Nikki Tamboli enter the house

The first photos of Aly and Nikki re-entering the house have been circulating on social media. In the stills, Aly can be seen interacting with Jasmin and other contestants as Nikki hugs Vikas Gupta and Eijaz Khan. Also Read – Bigg Boss 14, Day 60, Synopsis: Vikas Gupta Reveals Shocking Details About Kavita Kaushik; Aly Goni, Rakhi Sawant and Nikki Tamboli make a grand entrance

Aly and Nikki entered the house after Rakhi Sawant’s entry into the show. She enters the house from the BB Mall. Also Read: Bigg Boss 14: Rahul Vaidya Was Demoralized By Salman Khan And The Show’s Creators, Fans Say – See Poll Results

Later, we see Nikki coming out of a gift box and everyone is happy to see her. Eijaz Khan hugs her. We also see Jasmin jumping for joy after Aly’s reentry. She meets him in the confession room and hugs him. We then see Aly making some shocking revelations. He asks Jasmin why she was happy to see Vikas and doesn’t know what she did.

While Aly and Nikki’s re-entry definitely made everyone smile, fans of Rahul Vaidya were seen demanding the creators of Bigg Boss 14 to bring him back on the show.

During his stint on the show, Rahul showed his singing talent as well as his personality. He was mainly in the news for his fights with Jasmin Bhasin and Rubina Dilaik.