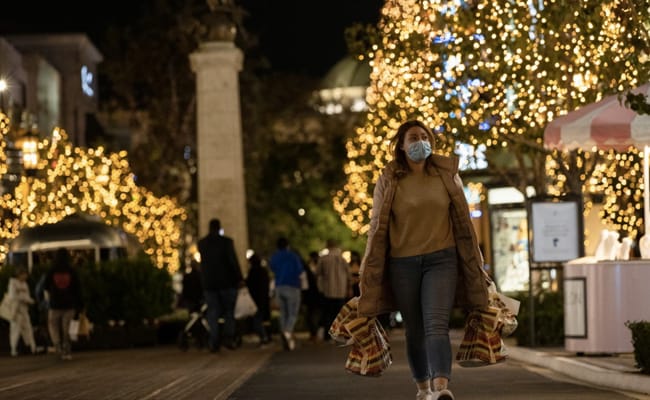 A shopper wearing a protective face mask walks past the Christmas decorations at The Grove shopping center.

A top coronavirus adviser to President-elect Joe Biden delivered a stern Christmas message to Americans on Thursday – “no Christmas holidays” – and warned they face a COVID-19 siege in the coming weeks despite the latest moves toward approval of a vaccine by the US government.

“The next three to six weeks minimum … is our COVID weeks,” Dr. Michael Osterholm, a member of Biden’s coronavirus advisory board, told CNN. “It won’t end after that, but that’s the period right now that we could have wave upon wave upon wave.”

Osterholm stressed that it would be several months before the nation sees widespread availability of vaccines, the first of which overcame a key regulatory hurdle in the United States on Thursday.

A panel of external advisers from the US Food and Drug Administration voted overwhelmingly to recommend emergency use authorization for a vaccine developed by Pfizer Inc and its German partner, BioNTech SE.

FDA approval is expected in a few days, paving the way for a massive inoculation campaign unparalleled in U.S. history that will launch next week. The advisory panel is due to review a second vaccine from Moderna Inc next week.

Preparations for the vaccine launch were in full swing.

Delivery giants United Parcel Service and FedEx Corp were ready to ship millions of doses to distribution preparation areas under contract with the federal government, giving vaccines the highest priority.

Pfizer vaccines require storage in cold deep-frozen units and must be prepared for injection and given quickly once thawed, posing special challenges for medical authorities.

“We only have six hours to use the vaccine,” said Dr. Stephen Dohi, chief pharmacist at USC Los Angeles County Medical Center, as he stood by the hospital’s newly purchased ultra-low freezer.

However, Osterholm said that considerable quantities of vaccines will not be available to the general public before March or April. Healthcare workers and nursing home residents are likely to be designated first in line to receive vaccinations.

Osterholm’s blunt warning came as the COVID-19 case load soared further, straining health care systems in cities and small towns across the country and leaving intensive care units in hundreds of hospitals to peak. or close to capacity.

He urged Americans to do everything they can to curb the contagion by limiting social interactions to members of their immediate households and, above all, “There are no Christmas parties.”

“There is no safe Christmas party in this country right now,” he said. Health officials have expressed frustration that millions of Americans ignored urgent calls to limit travel and social gatherings during the recent Thanksgiving holiday, even as the pandemic was already raging out of control.

On Wednesday, the daily death toll from COVID-19 in the United States surpassed 3,000 for the first time and rose to 3,253 deaths. That exceeded the loss of life from the Sept. 11, 2001, attacks and brought the total number of Americans killed by the virus since the start of the pandemic to more than 290,000.

A record 106,878 people were hospitalized with the highly contagious respiratory virus on Thursday night, an increase of at least 18% in the past two weeks, according to a Reuters tally of state-by-state data.

Pandemic hot spots were abundant in both rural areas and cities.

In California’s San Joaquin Valley agricultural region, less than 2% of intensive care unit (ICU) beds remain unoccupied, the California Department of Public Health reported Thursday. Available ICU capacity in the most populous state in the US has been reduced to just 7.7%.

In addition to the staggering human cost, the pandemic has devastated the United States economy, forcing millions of people out of work when state and local authorities imposed sweeping restrictions on social and economic activities to curb the virus. However, many Americans have resisted public health directives to wear face covers in public and avoid large crowds.

On Thursday, Virginia Gov. Ralph Northam, a physician, imposed a curfew from midnight to 5 a.m. among other measures that go into effect Monday and last until at least January 31.

Ohio Gov. Mike DeWine said he will extend his state’s curfew from 10 p.m. to 5 a.m. until Jan. 2, and Pennsylvania Gov. Tom Wolf, who tested positive for COVID-19 this week, announced new measures. mitigation that will take effect on Saturday.

Biden, who will take office on January 20 after defeating President Donald Trump in elections last month, has set a goal of vaccinating 100 million people, about one-third of the United States population, within the first 100 days of administration.

Although the vaccine is considered a critical weapon to ultimately defeat the pandemic, experts warn that its impact will be gradual due to initial supply limitations.

“It won’t be like turning the light on and off,” said Dr. Mark Mulligan, director of NYU’s Langone Health Vaccine Center and principal investigator of the Pfizer trials. “It’s going to be more like a dimmer switch.”