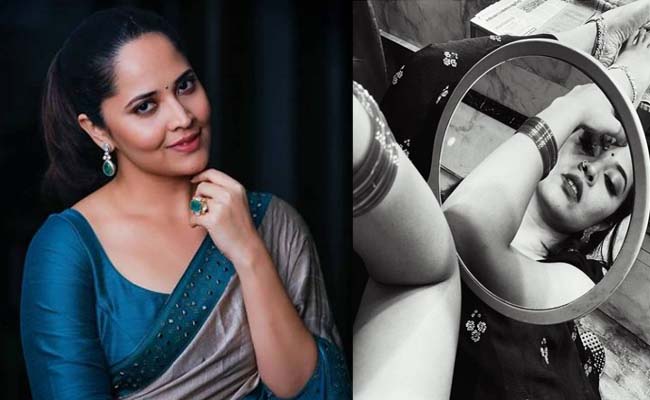 Television, silver screen anything AnasuyaPinde beaten to the ground. The anchor is entertaining and the actress is flattering. Whatever role is given, the protagonist enters it and does justice to it one hundred percent. Thus, her all-round role in a theatrical film became immensely connected to the audience. Recently she is going to make her debut in Kollywood with a new movie. She revealed this to herself. Another good story .. New start, shared a black and white photo of himself looking at his face in the mirror with the caption ‘Kollywood’ on social media. Everything was fine, but her name was tagged as Reference Silk Smith to that photo. (Read: Anasuya Kollywood movie .. Silk Smita biopic!)

It has been rumored that she will be seen in the upcoming Silk Smitha biopic in Kollywood. Speculations started that she had also gone to Chennai for the shooting of this biopic. These rumors have been put in jealousy check. Silk Smitha has stated that she will not be appearing in the biopic. This was tweeted on Wednesday. Anasuya is currently playing key roles in Chiranjeevi ‘Acharya’ and Allu Arjun ‘Pushpa’. Krishna Vamsi is also playing an important role in the movie ‘Rangamartanda’. Besides giving the green signal to play a leading role in Ravi Teja’s ‘Khiladi’, he will also be sprinkling with the hero in a special song. (Read: A thousand people … a hundred days!)