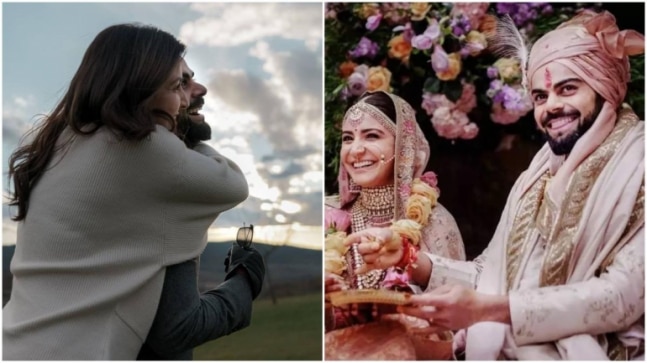 On her third wedding anniversary to Virat Kohli, Anushka Sharma shared a cute photo of the couple. The actress celebrated three years of union with Virat and wrote that it will soon be three. She misses her husband on their third wedding anniversary as the Indian captain currently plays for the team in Australia. Previously, Virat also shared an invisible photo from her wedding album. The couple tied the knot in an intimate wedding in Tuscany, Italy, on December 11, 2017.

WHAT DID ANUSHKA SHARMA PUBLISH?

Anushka Sharma posted an adorable photo with Virat Kohli, which appears to be from her trip to Bhutan last year. In the photo the actress is seen hugging her husband from behind, while the Indian patron is seen smiling. She wrote, “3 years of us and very soon, 3 of us. I miss you (sic)”.

WHAT DID VIRAT PUBLISH ON ITS ANNIVERSARY?

Virat Kohli also used his Instagram account to share an invisible black and white image of the two from their wedding. In the picture, Anushka can be seen beaming with joy as she looks at the love of her life. He wrote, “3 years and a lifetime together (sic)”.

After appearing in various films, Anushka Sharma married Indian cricket captain Virat Kohli in December 2017. The couple dated for many years before finally saying yes. Their wedding was an intimate affair attended by only friends and family. The couple and their relatives flew to Tuscany, Italy, for the wedding. They wore outfits designed by Sabyasachi Mukherjee. While Anushka looked gorgeous in a pale pink lehenga, Virat looked classy in an ivory raw silk sherwani with an old pink silk kota safa. From haldi and mehendi to her wedding and other functions, everything seemed dreamy.

Today we have promised each other to be united in love forever. We are truly blessed to share the news with you. This beautiful day will be made more special with the love and support of our family of fans and supporters. Thank you for being such an important part of our journey. pic.twitter.com/aobTUwMNAK

ANUSHKA AND VIRAT WAITING FOR THEIR FIRST CHILD

In August, Anushka Sharma and Virat Kohli surprised their fans when they announced that they were expecting their first child together. The couple took to social media to share a photo of the two of them where Anushka is seen flaunting her tummy while Virat can be seen smiling standing behind her.

“And then there were three of us! It will arrive in January 2021 ”, they had captioned the photo.

Anushka Sharma and Virat Kohli will welcome their son in January 2021.

READ ALSO | Virat Kohli and Anushka Sharma’s first child arrives in January 2021: and then there were three of us