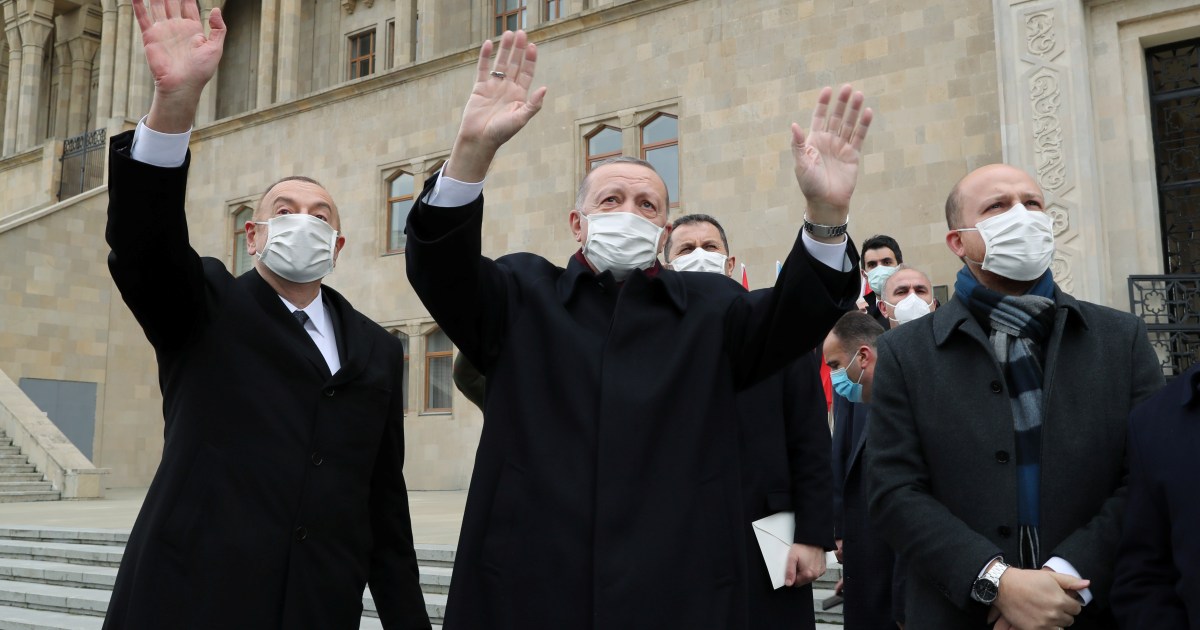 More than 3,000 soldiers participated in the military parade as the Turkish president reaffirms the alliance and condemns Armenia.

On Thursday a military parade was held in the Azerbaijani capital in celebration of the peace agreement with Armenia on Nagorno-Karabakh that saw Azerbaijan reclaim much of the breakaway region along with the surrounding areas.

The agreement took place exactly one month ago and ended six weeks of fierce fighting for Nagorno-Karabakh. It was seen as a major victory in Azerbaijan, but sparked mass protests in Armenia, with opposition supporters demanding that the country’s prime minister resign over his handling of the conflict.

Nagorno-Karabakh is located within Azerbaijan, but has been under the control of ethnic Armenian forces backed by Armenia since a war there led to a ceasefire in 1994. That war left Nagorno-Karabakh and the substantial surrounding territory in the hands Armenians.

More than 3,000 soldiers participated in the parade on Thursday and dozens of military vehicles passed through Baku. A flyover of helicopters and fighter jets completed the event.

A brigade of Turkish commandos took part in the parade, which also featured Turkish drones. Azerbaijani President Ilham Aliyev thanked Turkey for its support in his speech.

“From the first hours of the war, we felt the support of Turkey,” Aliyev said. “This is an example of our unity, our brotherhood.” The Azerbaijani president said the country was able to “restore historical justice” and blamed Armenia for starting the fighting.

Erdogan in his speech also took aim at Armenia and expressed the hope that the country will “learn” from defeat and take measures that will pave the way for a new era in the region.

“We hope that the Armenian leaders will evaluate this carefully and take courageous steps to build a future based on peace and stability,” Erdogan said.

He reiterated Turkey’s continued support for Azerbaijan: “As long as Turkey and Azerbaijan work hand in hand, they will continue to overcome all difficulties and run from one success to the next.”

In 44 days of fighting that began in late September and left more than 5,600 dead on both sides, mostly soldiers, the Azerbaijani army advanced deep into Nagorno-Karabakh, forcing Armenia to accept the peace agreement. The pact negotiated by Russia entered into force on November 10 and ended the violence.

Since then, thousands of people have regularly protested in Armenia, demanding that Prime Minister Nikol Pashinyan step down. The country’s opposition leaders hold Pashinyan responsible for failing to negotiate an early end to hostilities on terms that could have been more beneficial to Armenia. However, they have emphasized that the opposition was not pushing for the peace agreement to be annulled.

As Aliyev and Erdogan watched the parade in Baku, several thousand people in the Armenian capital demonstrated in front of the government building, calling for Pashinyan’s resignation. The protesters tried to enter the building in hopes of meeting with the prime minister, but the police dissuaded them. Dozens of people have been arrested.