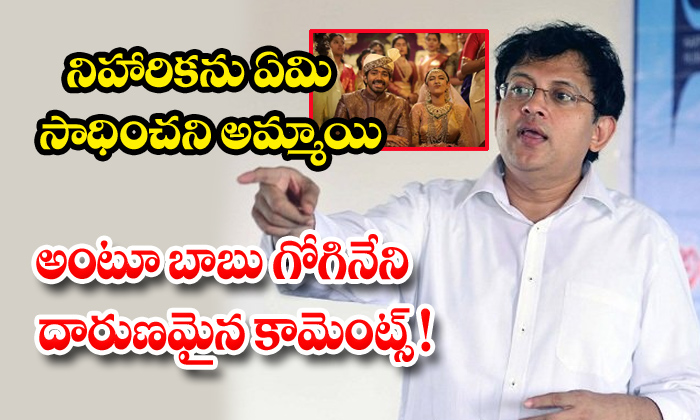 Babu Gogineni Bigg Boss Season 3 One of the contestants.As a rationalist, as an atheist Everyone knows about the lectures he gives.

Largely unfamiliar before Gogineni Bigg Boss Season 3 Then everyone got acquainted.Bigg Boss ShowWith the formation of negativity in the audience, making a lot of rhetoric Season Conditions were also created to be eliminated from.

Bigg Boss Season Three In anyway Skill ని Eliminate Always be active on social media making many attempts to do Gogineni After years of making sensational comments he is once again going viral on social media.

Usually weddings in celebrity families mean that everyone knows the range the media covers. This is the thread Nebula All media channels focused on the wedding.

In a similar vein, BBC Telugu reported a news story about the media coverage of Niharika’s wedding. However, perhaps Gogine did not like the news.

Hence Nebula Serious allegations were made against the bride.

Responding to that news Gogineni Appearing on TV Eckley laughs second grade The artist’s daughter’s wedding took place in a different state .It’s not just about being a daughter, but about having no other kind of achievement. BBC Channel Review Seems like a lot of fun to publish as Nebula He made sensational comments on the wedding. He also commented that it would have been fun if he had also shown the wedding card.

Thus the sensational comments made by Gogine on Nebula Wedding have now gone viral on social media.