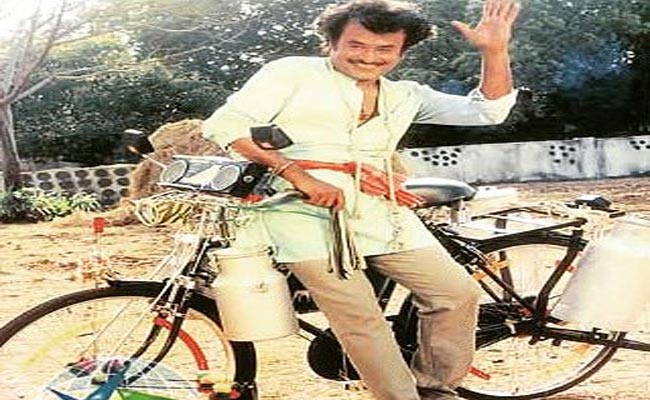 Sakshi, Chennai: The bicycle symbol is going to be crucial in Taliva Rajinikanth’s political journey. Whether the symbol belongs to him or not, it is learned that Annamalai has decided to choose Rajini style as a political symbol with a bicycle and milk can to resemble the movie Getup. The party flag with three colors is being prepared. Annayya Satyanarayana performed Yagadi Puja on Thursday in Thiruvannamalai for his younger brother. Rajinikanth’s political statement time is approaching. There is only 20 days left. With this, the party name, symbol and flag will be discussed at length. On Thursday, party chiefs Arjun Murthy and Tamil Rivi Maniyan met Makkal Mandram district secretaries. Priority increased as the visit lasted for hours. Although the party decided to keep the name highly secret, leaks came out regarding the symbol and flag. The Rajani party flag is going to be designed in three colors in a way that attracts the people. Information that it was decided at the meeting to prepare a sample design of the flag with the respective colors and take it to Rajini. Read: (Saffron behind Rajani!) Talk about being ready to pick up the bicycle as a party symbol. Some improvements have been made to the bicycle logo, with the idea that there may be some objections and controversies. In the movie Annamalai starring Rajini, the bicycle and the milk can entertained the fans of Getup. At present, this is likely to become a symbol for the party. It is learned that Rajini is focusing on the getup-style icon with the bicycle, Palakan. Although the Makkal Mandram organizers have agreed to the flag and emblem, the Mandram organizers say the final decision rests with Rajinikanth. Annayya Pujas .. Rajinikanth’s brother Satyanarayana went to Thiruvannamalai on Thursday. Special pujas were performed at the Aruna Girinathar Temple on the banks of the Ayyan Koneru. Satyanarayana spoke to the media after performing Yagam and Homadi pujas. Dheema said it was certain that Rajinikanth would make a political party statement on the 31st. He said chiefs were coming into the party. Rajani said it was a pleasure to compete in Thiruvannamalai and it was in the hands of God. Dheema expressed that the last hours are approaching for the Dravidian parties who do not believe in spirituality.
Source