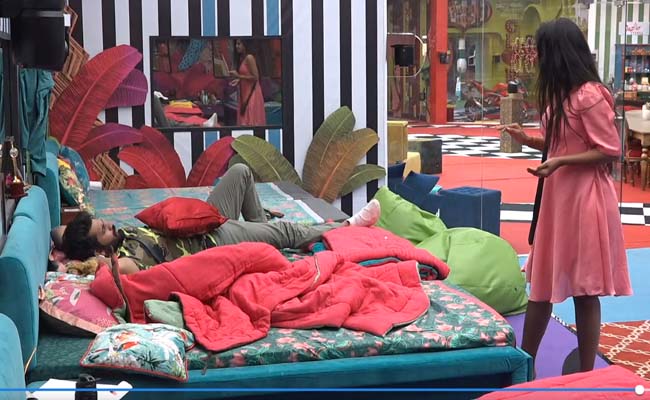 There are only ten days left until the end of the fourth season of Bigg Boss. Ariana is taking advantage of the opportunities given by Bigg Boss to connect more with the audience. Winning a second time gave the audience a chance to request a vote. Sohail, who went to settle the dispute with Ariana, did not get any positive results. Akhil, on the other hand, chuckled at Mona, who had given him advice to reduce the pulihora movement. Many more have happened today Bigbass Read this to know how the episode went on.

The next power, now the concentration
Big Boss gave you a third task called “concentration” as you prove yourself. Household members are required to count 30 minutes. This task should be completed by peeling the onion, peeling the corn and doing various tasks like this. They should be disturbed by the rest of the household regardless of the proper time. At first, the task with Monal began when she was asked a series of questions by members of the household who tried to hurt her concentration. Where is Mount Everest? What’s on your knee? Abhi patiently answered all the unrelated questions. Will children be born? Answered the question of who will be born in the hospital. (Read: I was in Monal Mind: Abhi)

Harika Tamanna, Monal Sivangami
Akhil in this task Monal‌Others sniffed as they tried to help. Ariana then completed the task and then entered the field. Who is Shivangami in this house? Harika asked him. Abhi replied that there was no need to think big about it. The beauty in Sivagami is to Mona, the terror in Sivagami is to Ariana, the love in Sivagami is to Harika and everyone is amazed. Asked if Pony Shivangami, Anushka, Tamanna had told anyone, Ariana .. Shivangami, Harika .. Tamanna, Monal .. Anushka replied. (Read: RGV calls for Ariana to win)

The closer you are, the further you can go.
No one has accurately calculated the time in this task. Ariana After counting 37 minutes to reach the given target, she stood as the winner and had the opportunity to speak to the audience once again. Her joy at being caught by the Golden Mike on this occasion was unbelievable. She said that the closer you are, the more you will move forward. I like to say love to those who like me a little, even a little difficult. Sohail Ariana, on the other hand, fell on the toy. He said that she had a toy in the washroom which she said was her own emotion. Are you going to kill me like Chintu .. he played with it for a while. Monal locks him in, saying that if he does not damage the toy, a fight will start. (Read: Bigg Boss: Abhijit jailed..he is number one!)

Sohail, Akhil, who spoke on deals
Akhil and Sohail told each other that if I win, you will buy a bike and a laptop. Sohail then won the Fight Scenes task to fight James. Afterwards Akhil became serious at the word that Monal was laughing at something. Sohail sings Akhil or Pulihora that it is not wrong to take a girl as a friend. He nodded at Monal as if he was doing something and talking like he was. You’ve been flirting from the beginning but there’s been a bit more in between. It’s not good to see. Made it clear that I did not say this to make you do something bad. But Akhil did not agree with her words. ‘I’m just kidding in front of everyone, just tell me if you think I’m wrong, talk to me,’ said Monal Hartai as she walked away. Monal puts out the word in her mind that she wants to spend time with you. If so why sit in the corner somewhere, he said as if he had no choice but to come and sit next to me.

Non-colic discussions
Afterwards Sohail Talked to Ariana and tried to resolve the issue. Ariana’s face tells yours that Avinash doesn’t like to talk about him now and rush towards me. Sohail said the panchayat was formed due to the task and both of them were wrong. Their conflict, however, has not been resolved. Again and again, he also had a fight with Akhil. Akhil consoled Sohail, who was devastated by all this, with tears in his eyes. (Read: Big Boss: No Chance for Girls This Time)