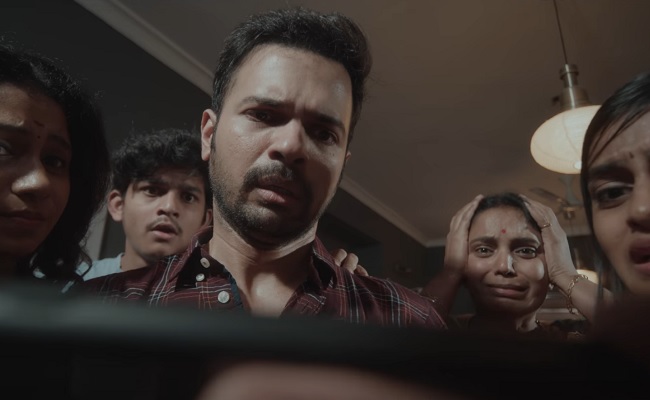 Even before the confinement was imposed, K Anand Rao (Srikanth Iyenger) and his family are already facing their own problems, as his daughter-in-law (Dakkshi) forces her son (Vamsee) to move out of this house and live separately. .

The confinement adds salt to the injury. Anand Rao’s daughter, Shanti (Sonia Akula), shows symptoms of COVID19 but he refuses to test her.

As the days go by, you begin to develop the same symptoms. What happens next is anyone’s guess.

The story takes place entirely in an apartment and all the characters speak loudly while maintaining social distancing at home.

Srikanth Iyenger, like an anxious parent, delivers an excellent performance. The other actors have no depth to their character.

The film has the technical and production values ​​typical of RGV films. There is not much to write about them.

Backing out:
Start to finish

The world has never seen a pandemic like a coronavirus before. With the exception of the Hollywood movie ‘Contagion’, not many films had explored the theme of a pandemic like this.

In the coming years, we will witness dozens of films on the subject of COVID-19. As always, RGV is quick to jump into the sand. “Coronavirus” is his latest film that has dealt with the health scare.

Directed by his partner Agasthya Manju, the film is another attempt by RGV to capitalize on the current situation. He’s been producing hot-topic movies, albeit in a boring way. This is no different either.

The 90-minute film begins with Anand Rao’s family troubles, the domestic quarrel between a mother-in-law and a daughter-in-law. Soon, the movie hits the main point with the government imposing a blockade on India.

It would have been a good movie if RGV and its partner had focused more on the anxieties and mental stress that the pandemic caused. Instead, they’ve shown us some silly footage of Anand Rao asking his entire family members to keep social distance in his apartment and commenting on the effects of the lockdown.

The film was destined for release in the early stages of closing. But now, at the end of 2020, those scenes look silly and make for a tiring watch.

With the eight characters talking nonsense and being silly in their apartment, coupled with the abysmal script by Manju and his team, the film has tested patience.