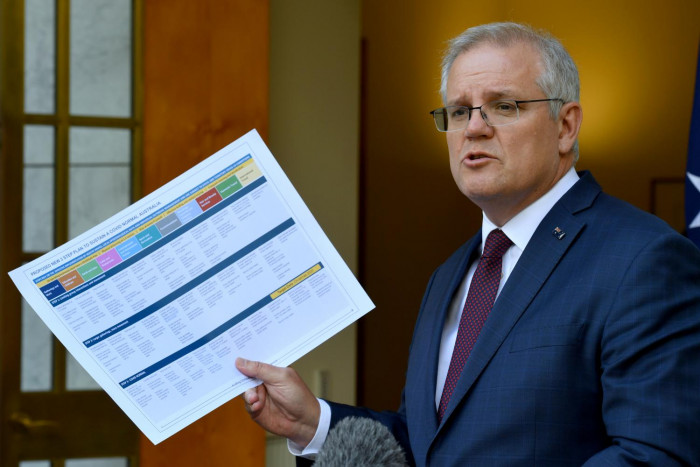 Australia had ordered 51 million doses of vaccine under joint development by CSL Ltd., University of Queensland

Australian Prime Minister Scott Morrison speaks after a cabinet meeting on the coronavirus. The country can take its time authorizing a vaccine because it has managed to limit local spread.

A Covid-19 vaccine candidate was ruled out in Australia because recipients tested false positives on certain HIV tests, underscoring the difficulties scientists face in rapidly developing an inoculation for the coronavirus.

The candidate vaccine, called v451, was being developed jointly by the University of Queensland and CSL Ltd., an Australia-based biopharmaceutical company that also operates blood collection centers in the United States. The Australian government had agreed to buy 51 million doses.

The episode illustrates why governments have sought access to multiple vaccines and more doses than necessary for their populations. Some vaccines may not be effective, adverse reactions may occur, and manufacturing limitations may limit the number of doses that can be produced.

The UK has already granted an emergency authorization to distribute the Pfizer Inc. and BioNTech SE vaccine, and the US could do so shortly. In Australia, however, community transmission of the virus is negligible after international borders were closed and strict local closures were imposed, so officials say there was no need for a similar emergency use authorization.

“We can take our time,” said Australian Department of Health Secretary Brendan Murphy. “We are in a good position because we have controlled the virus.”

The v451 vaccine was based on “molecular clamp” technology, which prevents spike proteins in the coronavirus from unwinding, according to CSL. Receptors develop antibodies against the coiled form. However, the vaccine involved the use of an HIV protein, causing some recipients to generate the antibodies that created the false positives in HIV tests.

The researchers said there is no possibility of the vaccine causing an actual HIV infection, and follow-up tests confirmed that there was no HIV virus in the recipients. Additionally, they said there were no serious adverse events or safety concerns in the 216 people who participated in the phase one trial, and that the vaccine created a robust response to the coronavirus.

“A lot of readers will see this and say, ‘My God, these vaccines are not safe,'” said Nancy Baxter, a clinical epidemiologist and director of the Melbourne School of Population and Global Health at the University of Melbourne, who is not participating in the judgment. “It is very important that this has nothing to do with the safety of the vaccine.”

The researchers said it would take another 12 months to redesign the vaccine and fix the problem, which would have taken too long. Implementation of the vaccine in its current form would have required significant changes in HIV testing procedures. That led authorities to decide that it was not worth taking the vaccine to a more advanced clinical trial.

The v451 vaccine was one of four that the Australian government had agreed to buy if it was effective. Australian officials said on Friday that they had not bet on the four vaccines going through the approval process.

“If that had happened, it would have been really extraordinary,” said Australian Prime Minister Scott Morrison. “That is why we share our risk.”

Morrison said on Friday that Australia had increased its orders for two of the vaccines that are still under consideration. One such vaccine, from the University of Oxford and AstraZeneca PLC, is being manufactured by CSL in Australia, reducing supply chain risks. In all, Health Minister Greg Hunt said Australia had access to more than 140 million doses, more than enough to cover a population of approximately 25 million.

Australian officials have said they expect the vaccines to be approved for use early next year and that the first inoculations of vulnerable populations will occur in March. Hunt said Friday that removing the v451 vaccine would allow manufacturers to speed up production of the other vaccines, meaning that a nationwide vaccine rollout could be completed faster than planned.

The researchers knew that there was a possibility that the v451 vaccine candidate could create false positives for HIV, although the risk was considered extremely low at the beginning of the study, Dr. Murphy said. During the phase one trial, the researchers were surprised by the prevalence of false positives, he said.

“It’s likely to be a promising vaccine, it’s likely to work,” said Dr. Murphy. “But we knew we didn’t want to have a problem with confidence.”