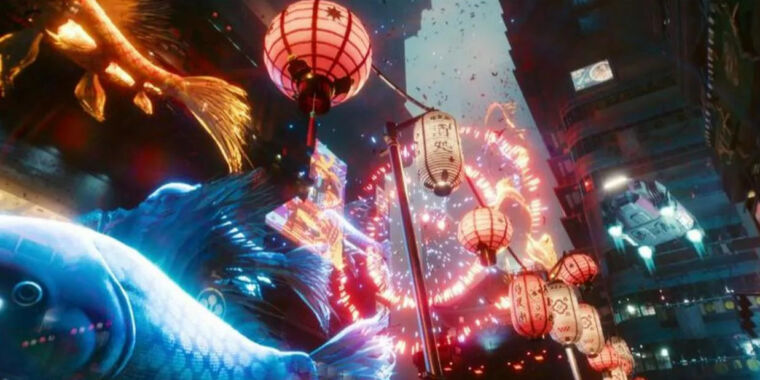 The PC version of Cyberpunk 2077 now features an on-screen prompt at load time that warns players of the risk of seizures. Elise Favis of the Washington Post was among the first to notice the addition last night.

“In this game, you will find a variety of visual effects (for example, flashing lights during brain dance sequences) that can cause seizures or loss of consciousness in a minority of people. If you or someone in your family has ever shown symptoms of epilepsy in the presence of flashing lights, consult your doctor before playing Cyberpunk 2077. If you or someone you know experiences any of the above symptoms while gaming, please stop and seek medical attention immediately. “

You booted up Cyberpunk 2077 to see a seizure warning appear at the beginning of the game that wasn’t there before. Really amazing to see how @DirtyEffinHippy helped make a significant change to occur for player safety. 👏 pic.twitter.com/ItNwuLOxla

Many games, including all titles in the Ubisoft catalog, include a similar on-screen warning for photosensitive gamers. Cyberpunk 2077 previously included a seizure warning in your EULA, but not on the screen. The Xbox One and PS4 versions of the game have yet to be updated.

The addition comes after Game Informer associate editor Liana Ruppert earlier this week posted her issues with seizures while playing a pre-launch copy of the game. Since that article was published, Ruppert reports that it has received “hundreds of videos disguised as support that are deliberate flashes to induce photosensitive triggers.”

That said, Ruppert added last night that “Since this began, four major AAA studies have contacted me and told me that this article has led them to re-evaluate their developmental process and to be more inclusive regarding neurological accessibility. if it means players can play safely. THANK YOU! “

After the Game Informer article was published on Tuesday, developer CD Projekt Red tweeted that he was exploring “a more permanent solution” to allow players to limit their potential exposure to epileptic triggers in the game. “We spent time this morning talking with Liana to make sure she was okay, as we were quite touched to read about her experience,” a CDPR representative told Ars Technica. “We appreciate and thank you for your PSA; it provided us with valuable information that we will act on.”

Roughly 2.7 million Americans have been diagnosed with some form of epilepsy, according to a 2014 Epilepsy Foundation article. Roughly 100,000 of them have some level of photosensitivity to the effects of strobe light, representing one person in every 3000 to 4000.

But incidence studies in other countries suggest that there may be as many as 800,000 photosensitive Americans who simply haven’t been exposed to a trigger that could trigger a seizure, with potential concentrations higher at ages 7 to 19.

The particular risk of seizures caused by video games has been well known for decades. In 1993, a 14-year-old boy died of complications from a seizure suffered while playing games. The world of Super Mario, leading to tabloid international headlines about general game safety. And in 1997, an episode of the Pokemon The anime that featured strobe effects led to nearly 700 Japanese children being hospitalized with seizure-related problems.

Incidents like these led Nintendo to begin including a warning about the potential dangers of strobe effects in the health and safety notices included with their games (Sony and Microsoft have similar warnings for their consoles). Nintendo has faced a number of lawsuits over the seizure-inducing effects of its games, including one it settled out of court in 2004.