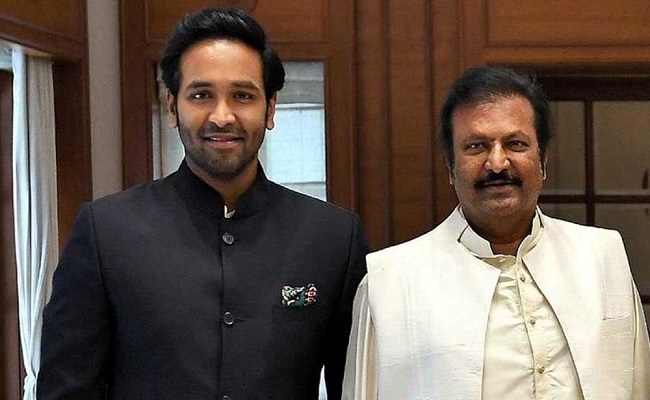 Matte is enchanted. The power of speech is like that. There are many actors in Tollywood. But there is something special about Mohanlal. Mohanlal movie is the name given to dialogues.

Anyone else after him in Dialog Delivery. The hero or the villain … the character says any dialogue in a timely manner and the low performance of it attracts the audience. Brought the title of Dialogue King to the same Mohanlal. There are no more prestigious awards than the title given by the audience.

Mohanbabu is so jealous of his son, the hero Manchu Vishnu himself, that he is so proud of the profit in the dialogue delivery. Dialogue King Mohan Babu celebrated his 45th birthday in November last month. Against this backdrop, his son Vishnu shared his father’s powerful dialogue with the fans.

Vishnu has revealed that his favorite dialogue is one of the most popular movies starring Mohanlal on Twitter. On this occasion, Vishnu brought the popular scene from the movie ‘Adavilo Anna’ starring Mohanlal to the screen.

‘It’s one of my favorite movies and dialogues he’s ever acted in. The way he narrates the dialogue in this film makes me jealous every time I see his mannerisms, ”Vishnu tweeted. The video went viral on social media.

It is no small matter that an actor excels in movies for 45 years. Mohanlal’s diversity in acting and dialogue has captivated audiences for over four decades. If the dialogue says that the son is jealous, what could be more praiseworthy to any father?

Anger at Jagan is a loss to him