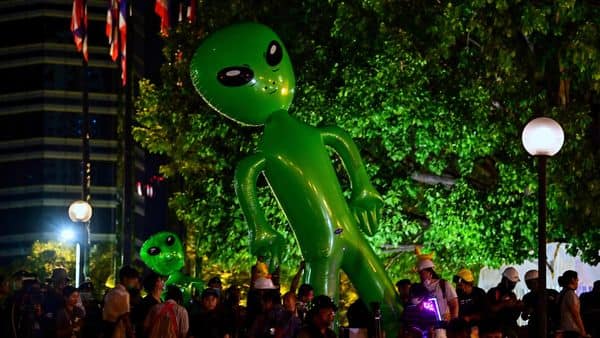 Amid debates about the existence of aliens, a former Israeli space security chief, Haim Eshed, said that aliens are real and that US President Donald Trump knows it.

There is a “Galactic Federation” and Israel and the United States have been dealing with aliens for years, the former Israel space chief said.

Haim Eshed, 87, who led Israel’s space security program for nearly 30 years, said that aliens are secretly in contact with the United States and Israel, yet they keep their existence quiet because “humanity is not ready. “.

Eshed also gave more descriptions of exactly what kind of deals have been made between the aliens and the US, which apparently have been made because they want to investigate and understand “the structure of the universe.” The Jerusalem Post reported citing an Israeli media outlet Yediot Aharonot.

He further said: “The cooperation includes a secret underground base on Mars, where there are American and alien representatives.”

During the interview with the Israeli newspaper, Eshed stressed that the President of the United States, Donald Trump, knows them and that he was “about” to inform everyone about their existence. However, the Galactic Federation allegedly prevented him from doing so, saying that they wanted to avoid mass hysteria as they felt humanity needed to “evolve and reach a stage where … we will understand what space and spaceships are.” Yediot Aharonot reported.

Speaking about why he chose to reveal this information now, he said: “If what I am saying today had occurred to me five years ago, I would have been hospitalized.”

“They have been waiting for humanity to evolve and reach a stage where, in general, we will understand what space and spacecraft are,” said Eshed.

“Today they are already talking in another way. I have nothing to lose. I received my degrees and recognitions; I am respected in universities abroad, where the trend is also changing,” he said.