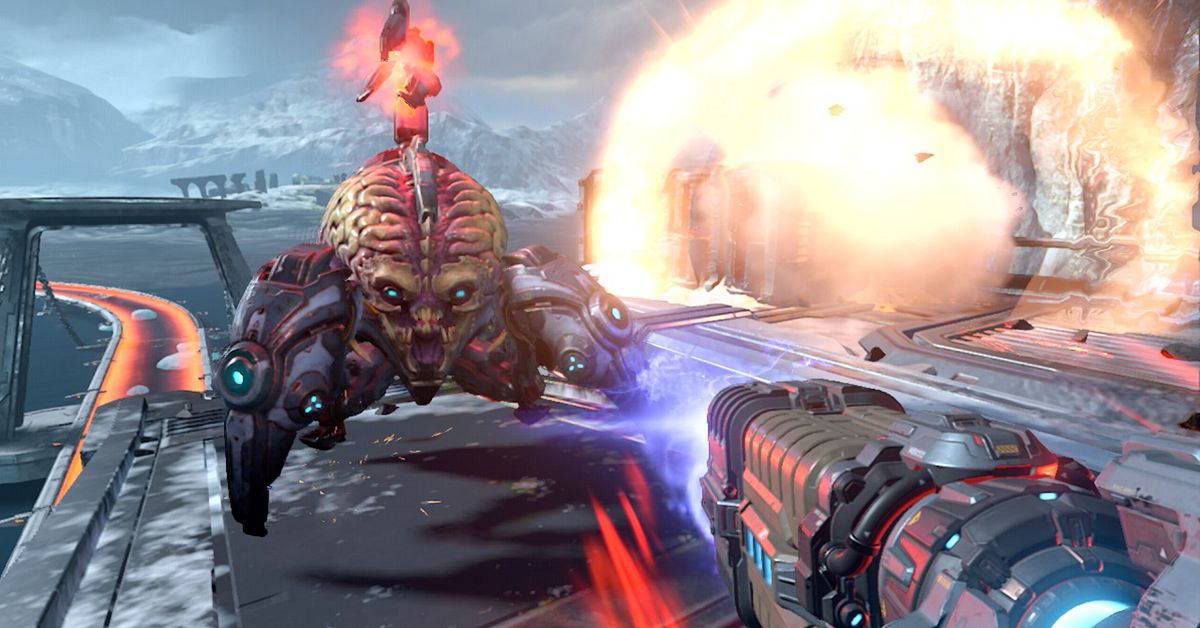 When the Switch version of the Condemn reboot was released in the same year that Nintendo released its hybrid console, it took many people by surprise. Not only was it rare to see an ultra-violent first-person shooter on a Nintendo platform, but it was truly impressive to see such a technically advanced game work on mobile hardware in the first place. Sure, the resolution was a bit blurry and it only worked at 30fps, but it was Condemn in your hands, which seemed impossible at the time.

Condemn was the first of several unexpectedly ambitious third-party switch ports, a list that has grown to include the likes of Supervision and The witcher 3. So this week’s release of its sequel, the excellent Doom Eternal, does not have the impact of the original Condemn Port. But somehow, that’s merit: Doom Eternal it feels like a fully viable Switch game now, rather than an unlikely technical feat that stretches the limits of hardware.

I played during the opening hours of Doom Eternal on Switch, and it actually works better than the original game. It’s still locked at 30fps, of course, and still makes use of much lower graphics settings and 720p resolution dynamic upscaling to keep that locked frame rate. But generally it stays sharper than the first one. Condemn port, and the Switch has no trouble keeping up with fast-paced action, which is so hectic that it’s often hard to pay attention to resolution. Loading times have also been greatly improved, and you have the option to play with the gyroscope (which the original game was also updated a few months after launch).

Doom Eternal is based on id Tech 7, the latest version of id Software’s internal engine, which means that it is a more technically advanced game than Condemn, so it’s great to see the Switch perform like this. A Switch version was planned from the beginning, unlike its predecessor, which may well have helped with optimization. The Switch version is also running quite late after being originally designed for release around the same time as other platforms, so it seems like the Panic Button migration studio made good use of the extra time.

The biggest notable cutout is in the scenes, which are slightly worse than on other platforms. They run in a widescreen aspect ratio and at a lower frame rate than the game itself, causing a jarring effect whenever control of a narrative sequence is taken away from you. It’s not a big deal as it doesn’t affect the actual gameplay, and I didn’t like the cut scenes on PC in the first place, but it’s definitely a compromise.

A more powerful Switch console is rumored to be released next year, and I wonder what it could do for games like Doom Eternal. Since it uses dynamic resolution to maintain performance, in theory the game could look a lot better out of the box running on a Switch with a faster GPU. For now, however, Doom Eternal on the current Switch it’s a perfectly reasonable way to play the game if it’s the only way to do it.

That brings me to the only other real problem I have with this version of Doom Eternal, which is that I really don’t have many reasons to play it. It would be perfect on a long flight, but obviously I haven’t spent a lot of time on airplanes lately, and it’s hard to see myself opting for the Switch version when staying home with other available hardware. Doom Eternal It also sells for $ 59.99 on Switch, though you can find it cheaper on other platforms, or try it for nothing if you’re an Xbox Game Pass subscriber.

But again, if the Switch is your only console, or your TV is constantly tethered, this is still a great option. While it doesn’t feel as miraculous as Condemn did three years ago, ultimately is a better conversion.