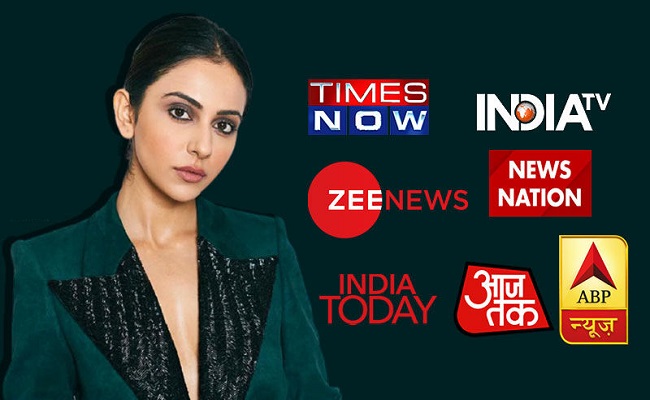 Rakul reacted unexpectedly as soon as he was accused of drugs. She went to the Delhi High Court seeking an order directing the media not to mention her name in connection with the case. Many were even surprised at the step taken by Rakul at the time. But Rakul finally achieved what he set out to do.

The News Broadcasting Standards Authority (NBSA) ruled in favor of Rakul. To this end, it apologized to Rakul and directed the 3 channels of Zee Group to air the article on the 17th. These include the main news channel Zee News.

NBSA has also issued guidelines on how the article should be aired on the 17th. Broadcast the article in accordance with their instructions / guidelines .. Ordered to report the matter in writing within a week of airing.

Along with the three Zee Group channels, orders have also been issued to Times Now, India TV, Aaj Tak, India Today, News Nation and ABP. The authority has ordered the deletion of all links given against Rakul from their websites and other social media platforms. It also said the orders should be implemented immediately.

It is learned that the case took a turn for the worse after Sushant’s death. At the same time, Rakul’s name appeared on the screen along with several other heroines. Rakul has approached the Delhi High Court to regulate electronic-print-web media without mentioning his name in the case till the completion of the NCB trial. The court directed the Ministry of Information to take her petition as a representation and submit a report.

However, Rakul once again approached the Delhi High Court as no guidelines were issued by the ministry, PCI and NBA. She once again brought to the attention of the court that articles were coming in the media against her arbitrarily. Along with the Ministry of Information, the Press Council of India and the National Broadcasting Associations must respond.

The NBSA, which finally investigated based on the evidence submitted by Rakul, ruled in her favor.

Anger at Jagan is a loss to him