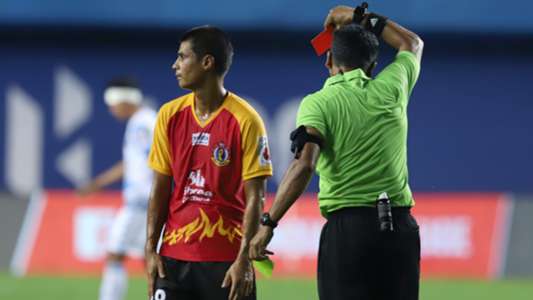 New entrants to the Indian Super League (ISL) East Bengal have filed a complaint against the quality of refereeing with the All India Football Federation (AIFF).

Robbie Fowler’s team is placed at the bottom of the league table after four games with a dot next to their name. They lost their first three matches and managed to score a point against Jamshedpur on Thursday despite playing most of the game out of numbers.

Eugeneson Lyngdoh saw a second yellow card and was sent off in the 25th minute for a tackle to Aitor Monroy in which the player made contact with the ball first. Towards the end of the match, Jamshedpur was also reduced to 10 men after a second yellow to Laldinliana Renthlei.

After the game, Fowler had said that his team felt they were up against 12 men on the field. Now, SC East Bengal management has responded to the situation with comments to the Indian Football Association.

Fowler had said: “I don’t think any decision would work out for us. Everyone seems to be against us. We just had to go out there and defend how we can and not concede and it was important to us.” to get the point. “

“We have suffered in the last three games, so after yesterday’s game we shared our comments with the AIFF. Hopefully, they will be taken into consideration to improve referee quality and maintain the spirit of the game for the rest of the tournament.” a source close to the development said objective .

He added: “This is a process that is available to all clubs where they can share comments on the officials with the federation.”

East Bengal’s next game is against Hyderabad on Tuesday.