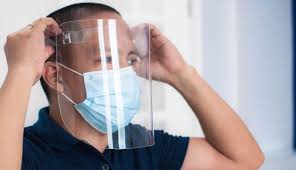 Tokyo, December 9: Face shields alone are not very effective in preventing COVID-19 infection without masks, says a new study that evaluated what happens to airflow around these plastic screens when someone is close sneeze
The research, published in the journal Physics of Fluids, noted that the number of people using face shields as a substitute for masks has increased in schools, universities, restaurants and service companies.
However, scientists, including those at Fukuoka University in Japan, said that sneezing produces a fluid phenomenon known as vortex rings that can capture microscopic particles and break through the shield barrier.
“A vortex ring is a donut-shaped vortex that is generated by an instantaneous ejection of fluid from a circular orifice. It resembles the bubble rings made by dolphins, ”explained study co-author Fujio Akagi from Fukuoka University.
In the study, the scientists evaluated what happens when a face shield wearer is exposed to a sneeze from an infected person who is three feet from him.
“The vortex rings generated by the sneeze capture the microscopic droplets within the sneeze and transport them to the upper and lower edges of the face shield,” Akagi said.
He added that the drops travel rapidly to the wearer of the face shield, between 0.5 and one second after the sneeze started.
“If this arrival time is synchronized with inhalation, the shield user will inhale the drops,” he added.
According to the analysis, the scientists said that the droplets from sneezes are carried not only by the high-speed airflow caused by sneezing, but also by the vortex rings generated by sneezing.
They said that microscopic droplets carried by the vortex rings can enter the shield through its upper and lower edges.
“It was also confirmed that some particles, in this simulation, 4.4 percent of the droplets released, entered the inside of the face shield and reached the vicinity of the nose,” the scientists wrote in the study.
Researchers believe that face shields alone are not very effective in preventing COVID-19 infection.
However, by gaining a better understanding of the weaknesses of the face shield, they hope to improve protection by reducing the flow that enters the interior of the shield.
“We are currently developing and demonstrating several improved shields,” Akagi said.
“We want to help keep people safe from infection and we believe that one day in the near future medical workers will be able to prevent infections by wearing just a face shield and a regular mask or ideally just a face shield.” added. (PTI)