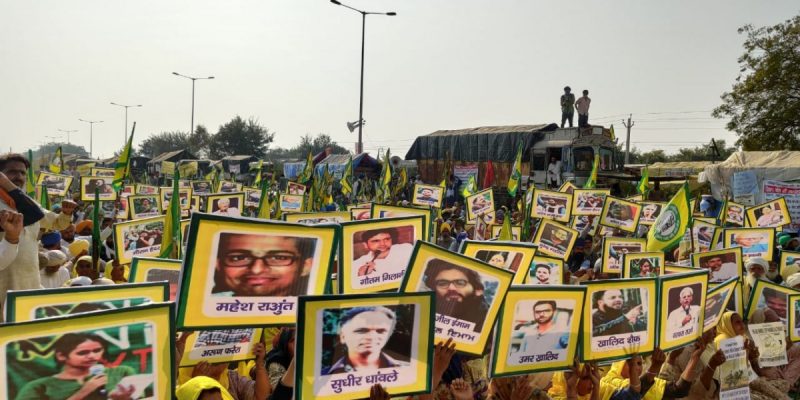 Bahadurgarh (Haryana): A day after farmers’ unions rejected an elaborate proposal by the Union government to address multiple concerns related to the three controversial farm laws, the Bharatiya Kisan Union (Ekta-Ugrahan), the largest group among the 32 organizations, marked Human Rights Day demanding the release of several intellectuals and democratic rights activists who are in prison.

In an indication that the group can only intensify its protests against the Center by adopting a broad-based agenda, the BKU (Ugrahan), which is camped near the Tikri border in Delhi in Bahadurgarh, organized a function to show solidarity with other democratic and human organizations. rights movements. In a full-blown attack on what they called an “authoritarian” central government led by Prime Minister Narendra Modi, peasant leaders claimed it was time to support the country’s different democratic movements, as their broader struggle was against the “corporatization”. of Indian agriculture, and not simply against the contentious agricultural laws.

“We are facing a prime minister who is behaving like an exploiting king. All of these activists and intellectuals have been arrested on trumped-up charges simply because they highlighted the plight of the poor, without caring for their own safety. Now it is our responsibility to support them. That is why we are also demanding the release of all these intellectuals and activists, in addition to our resistance to the agricultural laws, ”said Joginder Ugrahan, president of the BKU (Ekta-Ugrahan). The wire.

What did people like Gautam Navlakha or Sudha Bharadwaj do? They showed how poor people in remote areas live under extreme stress and how they were treated unfairly by governments. There are others that show how the people of Kashmir live in constant fear of the security forces. We believe that the Modi government incarcerated all of them just to silence them. It is our responsibility, then, to speak for the citizens, ”he said.

Ugrahan’s deputy Jhanda Singh said the farmers’ movement could not be isolated from the broader political developments in the country. “Most of the protests in recent years, whether in Shaheen Bagh (against the CAA-NRC) or against the removal of Article 370, happened because the government did not bother to consult those who would be affected by these measures. The same happened with agricultural laws. Only a few who have more than 5,000 acres of land and corporations have kept up. Farm laws are against 85% of Indian farmers who own very little land. And now the government is trying to cover up their sins by giving us false guarantees. “

“It is time for all democratic movements to come together to expose this government. Your intentions are not correct. Hum toh sach bolenge (We will tell the truth anyway), ”he said. The wire.

Since the farmers began their agitation, their one-point agenda has been to get farm laws repealed. Despite ideological differences, these organizations could come together to be on common ground. However, BKU groups such as those in Ugrahan or Rakaunda and some left-wing unions have been highlighting the issue of “false imprisonment” of political prisoners in Punjab since the last four months, when the farmers’ agitations began in Punjab and Haryana.

Yet many in the movement are wary that talking about issues like the CAA or Article 370, or the jailing of intellectuals and activists, can dilute the main subject of farm laws. Some of the unions have therefore strategically stayed away from speaking out on these issues despite supporting the view that the Modi government has been largely “authoritarian.” The ruling party, BJP, has used these issues to successfully polarize the Indian electorate, and may also try to change the opinion around the farmers movement in its favor in this regard.

However, Joginder Ugrahan doesn’t mind. “We know how this government has pushed the poor against the wall. Today, farmers feel more affected by his unilateral and pro-business approach. Tomorrow, someone else would feel the sting of government policies. It is time for us to speak for each other, ”he said.

“Even when we make it clear that our agitation goes against farm laws, the government and the Godi The media (docile media) painted us as Khalistani. Now you can call us “urban naxals.” But the farmers and the poor know that all this is pure propaganda. That is why we are not afraid ”, he added.

He emphasized saying that farm laws are the result of the government’s broader trend to make farming business-friendly. “It was Congress that first applied the policy of economic liberalization; the BJP has now stepped up it. When we say that our movement is not political, we mean that we are not affiliated with any political organization. But we are definitely ‘political’ in the sense that we oppose the corporatization of agriculture. “

“It is a question of our land. We want farm laws to be complied with and, at the same time, for the Public Distribution Plan (PDS) to be more comprehensive. And in that sense we will support and seek the support of all democratic groups that oppose such policies that harm the poor, ”he added.

“We also believe that the government has used all the laws of the country against the poor. The same laws are not being used against the rich, who have violated all the rules without fear, “said Ugrahan.

Throughout the day, hundreds of people sat in the sun with banners of political prisoners, demanding their release. BKU (Ekta-Ugrahan) had invited various cultural and intellectual activists to address the crowd. Among them were the economist Navsharan Kaur, the academic-activist Nandini Sundar, Vimal Bhai of the National Alliance for People’s Movements (NAPM), the renowned Punjabi playwright Kewal Dhaliwal, and the retired scientist Mahavir Narwal, whose daughter Natasha Narwal, Also one of the founders of feminist student group Pinjra Tod, she is currently in jail on severe UAPA charges in cases related to the 2020 Delhi riots.

Other speakers spoke about how activists such as Stan Swamy, Umar Khalid, Khalid Saifi, Sudha Bharadwaj, Surendra Gadling, Mahesh Raut and many others have been falsely implicated in criminal cases for their constant work among marginalized sections of the population.

A play at the protest. Photo: Ajoy Ashirwad Mahaprashasta

Speaking on the occasion, Joginder Ugrahan said: “Pro-people writers and rights activists have been silenced with a repressive campaign. Their protests were peaceful, much like ours. However, they are in jail. There is a situation similar to an emergency in the country. Today’s (farmers’) struggle strengthens people’s rights to freedom of expression. “

The act ended with a 70-year-old play. Harhiya-Shauniya (Crops of Rabi-Kharif considered as two daughters of Punjab) written by Joginder Baharla against feudal invasions. It was recreated in the context of a possible corporate control over agricultural land by Dhaliwal’s group ‘Manch Rangmanch’.