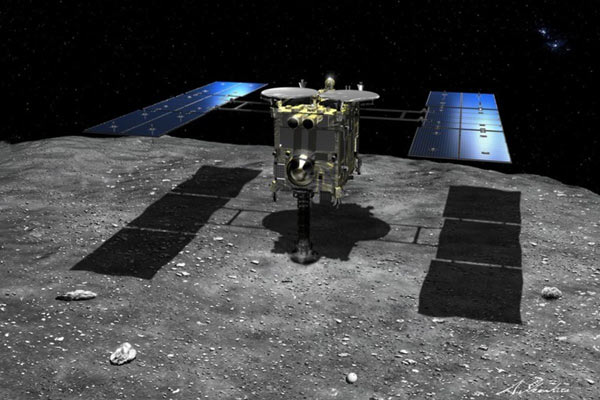 The asteroid spins like a top, rotating every 7.6 hours.

Japan has once again recovered samples from a distant asteroid, which scientists will analyze for clues about the ancient delivery of water and organic molecules to Earth. The Hayabusa2 mission return capsule, the size and shape of a wok, parachuted to a landing in the red sand of the Woomera Desert, Australia, in the early morning of December 6, after a journey of nearly 5.3 billion kilometers to the asteroid Ryugu. A team of helicopters went to a radio beacon and found the capsule intact.

Asteroid 162173 Ryugu is a diamond-shaped space rock. It was discovered in 1999 by the Lincoln Near-Earth Asteroid Research (LINEAR) project, a US-based collaborative project to catalog and track space rocks.

JAXA estimates that the asteroid is about 2,952 feet (900 meters) in diameter. Ryugu is orbiting the sun between Earth and Mars and occasionally crosses Earth’s orbit, which means that the space rock is classified as “potentially dangerous”, although the body does not pose an imminent danger to our world. The asteroid spins like a top, rotating every 7.6 hours.

The samples were collected by Hayabusa2, an explored asteroid, which was launched in 2014, from the asteroid Ryugu, about 300 million kilometers from Earth.

The probe collected both surface dust and pristine material from below the surface that was stirred up when an “impactor” was fired at the asteroid. The material is believed to have not changed since the time the universe was formed.

Scientists hope that the samples, which are expected to amount to no more than 0.1 grams of material, could help shed light on the origin of life and the formation of the universe.

The Japan Aerospace Exploration Agency (JAXA) confirmed that the samples had been recovered, with the help of beacons emitted by the capsule as it plummeted to Earth after separating from Hayabusa2.

The capsule will now be in the hands of scientists who will conduct an initial analysis, including verification of gas emissions. Then it will be shipped to Japan.

Hayabusa2 will now begin an extended mission targeting two new asteroids. It will complete a series of orbits around the sun for about six years before approaching the first of the asteroids, named 2001 CC21, in July 2026.

Scientists hope it will be able to photograph CC21 and that the flyby will help develop knowledge about how to protect Earth from an asteroid impact.

Hayabusa2 will then head towards its main target, 1998 KY26, a ball-shaped asteroid with a diameter of just 30 meters. When the probe reaches the asteroid in July 2031, it will be approximately 300 million kilometers from Earth.

It will observe and photograph the asteroid, not an easy task since it spins rapidly, rotating on its axis approximately every 10 minutes. But Hayabusa2 is unlikely to land and collect samples, as it probably wouldn’t have enough fuel to return them to Earth.

Now you can get carefully curated stories from Telangana today in Telegram everyday. Click the link to subscribe.