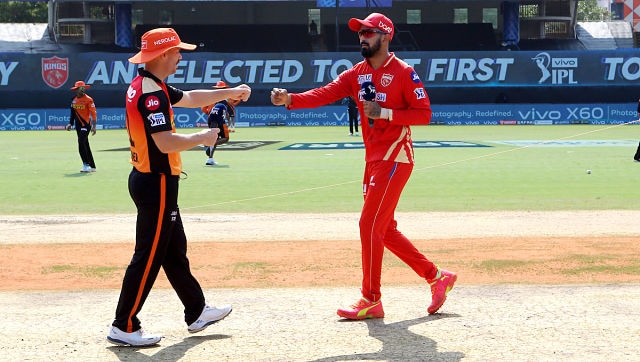 IPL 2021, Live Cricket Score, Punjab Kings (PBKS) and Sunrisers Hyderabad (SRH): Good overall performance by SRH. They read and adapted well to the wicket. The bowlers relied on cutters and slower ones on a sluggish track to limit the dangerous PBKS batting line to just 120. PBKS did not adapt to pitch and conditions, their shot selection was poor and they lost wickets at on a regular basis. that’s why they never reached momentum. SRH batsmen, on the other hand, played smart. Without going for wide shots, dealing in singles and duos and getting the job done without much fuss.

Punjab Kings (PBKS), led by KL Rahul, is one place above SRH in the bottom with one win in three games. It’s going to be a tough fight in Chennai as both teams are desperate to reach the winning momentum.

For SRH, the main problem is their middle order. The issue was there last season as well but still reaching the playoffs. This time, Warner and the team’s managers will struggle to get to the playoffs if they don’t fix their problems sooner. Three bad defeats are not the kind of start they would have anticipated but they still have 11 games to play.

Against Punjab, SRH could look at the option of selecting Kedar Jadhav who has experience in middle order play. He also needs to prove a point after SRH bought him for Rs 2 crore at the auction despite having a poor season last time in the UAE.

Kane Williamson could be very positive for Hyderabad but it is unclear whether he is fit to play the match.

Meanwhile, Rahul’s team will probably see changes in the playing XI as they move from Mumbai to Chennai. The foreign pacers – Riley Meredith and Jhye Richardson have gone for runs in the previous games and given the nature of the track in Chennai, they will have to rely on spinners. Rahul is also under some pressure in terms of his strike rate. It will be interesting to see how he reacts with the bat on Wednesday.