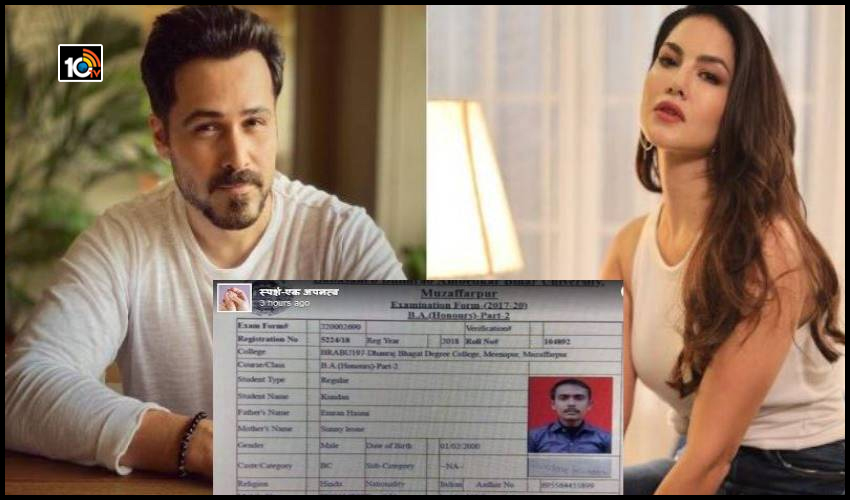 Bihar student names Emraan Hashmi, Sunny Leone as parents: A student says that Bollywood actress Sunny Leone and actor Imran Hashmi are his parents. Sounds shocking to hear. Really .. Sunny Leone .. When did Imran Hashmi and his wife get married? Are they both parents to the student? If it’s not ridiculous, is there any way to sing? Sounds like that. But this is not a joke. These are the details on a college student hall ticket. The management of the college was also shocked to see them. Let’s find out what the story is about. Beam Rao Ambedkar, a Bihar University professor, and his staff were shocked to see Atagadi’s hall ticket during the exams. In Kundan Kumar’s ticket, his mother is Bollywood star Sunny Leone and his father’s name is famous Bollywood actor Imran Hashmi. Not only that..the name of the area where Kundan lives is in the hall ticket as if he is living in Chaturbhuj place known as Red Light area in Muzaffarpur. The varsity team that saw these things is the only one wondering. Babu thinks all this. Are these real? Or did the student create something like this with him? Suspect that. The tribe went viral after Kundan Kumar’s ticket was leaked to social media. Not to mention the original Sunny Craze. Officials say there is nothing negligent in this. The student himself wrote so in the application. University Registrar Ram Krishna Thakur said, “We have ordered an inquiry into this. It has been made clear that the student is responsible for whatever happens to it.” He said he hoped the work would be done to mislead the authorities. He said that if it is true, it is OK, but if it is untrue, appropriate action will be taken. He said the whereabouts of the student would be ascertained through the Aadhaar card number and mobile number on the ticket. Previously Sunny Leone’s name also appeared in Bihar PhD Merit List. The list shows that she has a combined 98.5 percent pass rate in the exams.