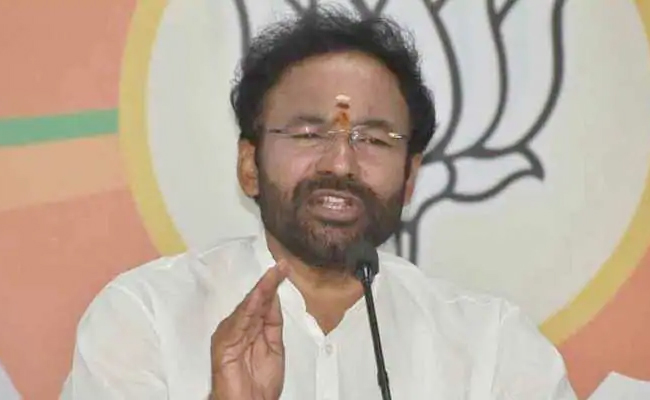 Sakshi, Warangal: Union Home Minister Kishan Reddy has said that the Indian Prime Minister Narendra Modi government is committed to developing the city of Warangal. Secunderabad, who was sworn in as Union Minister after winning the seat, said important bills like Article 370 in Parliament were delayed from coming to Warangal due to corona virus. He was speaking at a media briefing at the Hanmakonda Circuit Guest House here on Thursday. Warangal .. Hyderabad is the second largest city, a historic city, a city with a political consciousness, a city with a history of ousting the Rajputs. Ayushman said it was being implemented in all the states in India but was not being implemented in Telangana due to the wrong decision taken by the CM KCR. He said poor people in the state are being prevented from getting health insurance. Warangal city has been allotted Rs 5 crore for fresh water for every household, Bhadrakali pond, Thousand Pillars temple, city squares, sewage treatment plant at MGM Hospital and libraries. If development work is undertaken with crores of rupees for Kazipet Dargah .. the state government has not given a single rupee. He said that for the first time in the country, construction of national highways with cement has been started and it will be started soon with Union Minister Nitin Gadkari. (Divyanga Jawans Cyber ​​Warriors) said that if the state government gives land to Mamunur Airport, the central government will act with full responsibility. As Union Minister, he promised to work for the development of Warangal. He said he has had an unbroken relationship with Warangal district since 1996, where he knows the atom. They demanded compensation of Rs 10,000 for floods anywhere in Telangana. He said that they wanted to weaken the BJP by holding elections in Hyderabad and Hyderabad, but .. TRS fell like a boccaborla. He said that floods had also hit Warangal and demanded flood relief of tens of thousands of rupees here as well.
Source