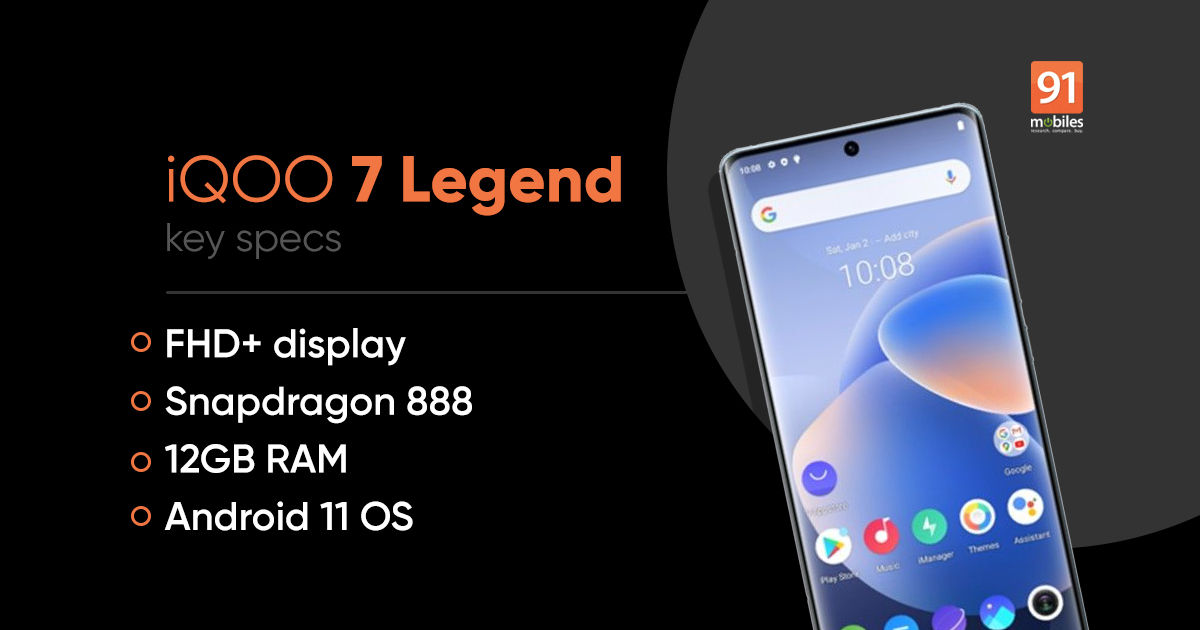 India’s iQOO 7 series launch is on April 26th and the lineup will include iQOO 7 Legend and iQOO 7 vanilla, which is said to be rebranded iQOO Neo 5. Now, ahead of the announcement, the specs of the iQOO 7 legend were featured on Google Play list Console before launch event. The listing, as seen by Sharma Mukul, reveals that it will come with a 12GB RAM display, Qualcomm Snapdragon 888 SoC, Adreno 660 GPU, Android 11 OS, and FHD +. The Google Play Console also includes a render of the phone, which shows a punching hole cutout for the selfie snapper, narrow bezels, and slightly curved edges.

Also read: The launch of iQOO T India seems imminent as the name appears on the Indian IMEI database

To recall the specifications of the iQOO 7, it sports a 6.62-inch FHD + AMOLED display with a punching hole cutout for the selfie snapper, a 20: 9 aspect ratio, HDR10 +, and a 120Hz refresh rate. It is powered by a Qualcomm Snapdragon 888 SoC paired with up to 12GB LPDDR5 RAM and 256GB UFS3.1 storage under the hood. The phone puts custom iQOO UI skin based on Android 11 out of the box and has a fingerprint sensor in display for security. A 4,000mAh battery with 120W fast charging support keeps the phone running.

IQOO 7 packs a triple rear camera setup with a 48MP primary camera and a couple of 13MP sensors. There is a 16MP snapper on the front for selfies and video calling.
Connectivity features include Wi-Fi 6, 4G LTE, Dual-SIM support, Bluetooth v5.2, NFC, and Type-C port. The iQOO 7 measures 162.2mm x 75.8mm x 8.7mm and weighs 209.5 grams. We should know the pricing and availability details of India next week when the phones are officially launched in the country.