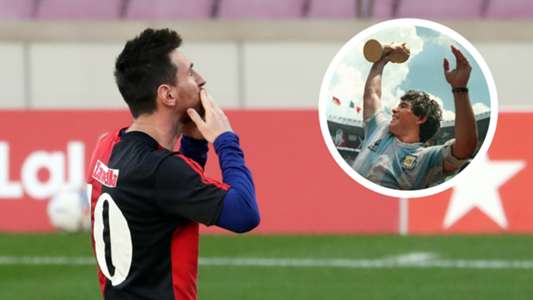 Kevin-Prince Boateng feels that Lionel Messi should pay the utmost tribute to his great Argentine teammate Diego Maradona by signing for Napoli.

Maradona passed away last month, and Messi has already paid his respects by removing his Barcelona jersey when he scored against Osasuna to reveal a Newell’s Old Boys jersey.

Newell’s was the team Messi came to, and Maradona had a season at the club towards the end of his career.

It was at Napoli that Maradona cemented his legendary status, with the 1986 World Cup winner guiding the club to two Serie A titles in 1987 and 1990.

Napoli have retired Maradona’s number 10 jersey, which means the current occupant of that Barca jersey would have to take on a different number, but Boateng feels it’s a move Messi should make.

“Messi is going to end his contract at Barcelona, [but] How wonderful would it be if you just called Napoli and said ‘I’ll come’? “Boateng said. ESPN .

“‘They no longer give the number 10 shirt, [but] I would love to honor Maradona’s number 10 and I would love to come and play for one or two years at Napoli, without thinking about money or anything, just my heart. “

Monza midfielder Boateng, who spent time on loan with Messi at Barcelona last year, has described the prospect of moving to Napoli as a movie script, but would love for it to happen.

“It would be like a movie,” Boateng said. “He would have to go practice in a damn helicopter because people would eat him alive. They would be so happy.

“But just that story: ‘In honor of Maradona, I will come and play for Naples’, what kind of story would that be for the world, not just for football, for the world?

“It would be a message, it would be history everywhere. I wish I was in Messi’s shoes. I want to be Messi. I would call the president of Napoli and tell him.”

For the moment, Messi’s focus is on lifting Barcelona up the La Liga table, which currently sits 12 points behind leaders Atlético de Madrid, starting with a home game against Levante on Sunday.