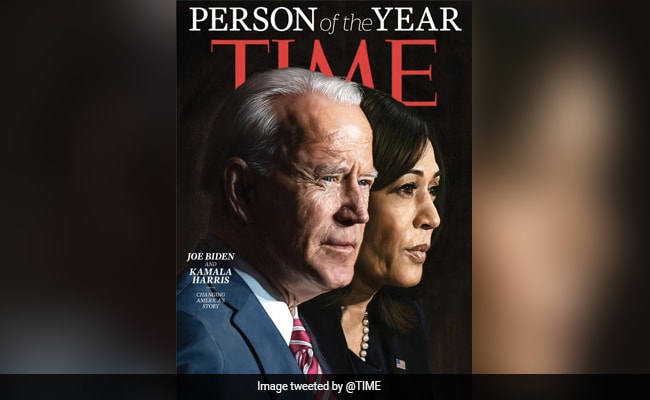 The cover of Time magazine has a photo of Biden and Harris with the caption “Changing American History.”

Weather showed the couple on the cover with the caption “Changing America’s History.” Joe Biden and Kamala Harris were chosen before three other finalists.

US President-elect Joe Biden and Vice President-elect Kamala Harris were named Time magazine’s “Person of the Year 2020” on Thursday for their election victory over Donald Trump.

“For changing American history, for showing that the forces of empathy outweigh the fury of division, for sharing a vision of healing in a grieving world,” Time said, explaining his choice.

The Democratic couple were chosen before three other finalists: frontline healthcare workers and Anthony Fauci, the racial justice movement and President Trump.

The cover of Time magazine features portraits of Biden, 78, and Harris, 56, with the caption “Changing America’s story.”

“Together, they offered restoration and renovation in one ticket. And the United States bought what they were selling,” the publication said.

Biden beat Trump by 306 electoral college votes to Trump’s 232 to end the presidency of the real estate mogul-turned-politician after one term.

Biden received roughly seven million more votes than his Republican adversary, which he has yet to concede, citing widespread fraud for which there is no evidence.

Time praised the Democratic nomination for ousting a sitting president for the 10th time in American history.

“Biden and Harris had to revive the party’s dwindling strength with white voters without college degrees; energize its emerging base of diverse urban young voters; and motivate hordes of angry suburbanites, particularly college graduates and women, who had fled from the Trump era. GOP, “he wrote.

The Time magazine award, presented annually since 1927, honors the person or persons who most impacted the news, for better or for worse, during the calendar year.

When asked by Time what he would like people to say about him after four years in the White House, Biden replied, “That America was better and average Americans are better the day we left than the day we arrived. is my objetive. “

Harris is the first vice president-elect to be named Person of the Year.

She said in an interview with Time that the Biden administration would have to address a number of issues from the White House, including the pandemic, an “economic crisis” and a “long overdue settling of racial justice scores.

“We have to be able to multitask, like any parent or any human being,” Harris said.

Essential workers on the front lines against the coronavirus pandemic, including doctors, nurses and grocery store clerks, topped a reader poll on who should be named Person of the Year.

Earlier Thursday, Time named basketball superstar LeBron James Athlete of the Year for his accomplishments on and off the court.

The 35-year-old Los Angeles Lakers player was honored for fighting voter suppression among black citizens in a year in which he won his fourth NBA title.

K-Pop sensation BTS was named Artist of the Year.