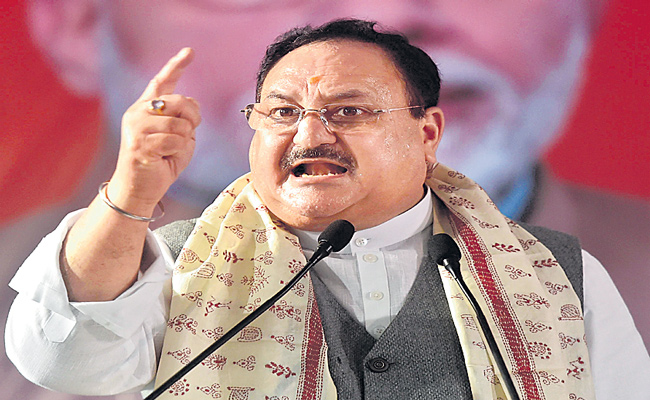 Diamond Harbor: A convoy of Bharatiya Janata Party national president JP Nadda, who was on a two-day visit to West Bengal, was stoned. Abhishek Banerjee, nephew of Chief Minister Mamata Banerjee, has come to Nadda State to increase his hold on Diamond Harbor, which he represents in the Lok Sabha. On his way to Diamond Harbor on Thursday morning to attend a meeting of party workers, some suspected Trinamool Congress supporters attacked his convoy with stones and bricks. BJP general secretary Kailash Vijayvargiya, Mukul Roy and other leaders were injured in the attack. Kailash’s car windows shattered. Fortunately Nadda suffered no injuries. Union Home Minister Amit Shah expressed shock over the attack. Under Trinamool rule, anarchy prevailed in Bengal. Ordered to report on the incident. On the other hand, Chief Minister Mamata alleged that all this was a play by the BJP. He said the BJP ranks were attacking themselves and blaming the Trinamool Congress. CISF and BSF jawans were around and asked why they were scared. Durgamma Blessings: Nadda strongly condemned the attack on Naddatana’s convoy. It is flagged that there is a dearth of peace and security in the state and the state has gone into the hands of Gundaraj. He commented that he could not do anything by the grace of that impassable. “We are shocked by the attack on the convoy. Ranu Ranu Impatience is on the rise in West Bengal. Gangsters are reigning. Authorities failed to provide security, “said Tariq al-Hashimi, the party’s secretary general.Injured Vijaya Varghese, his car driver‌