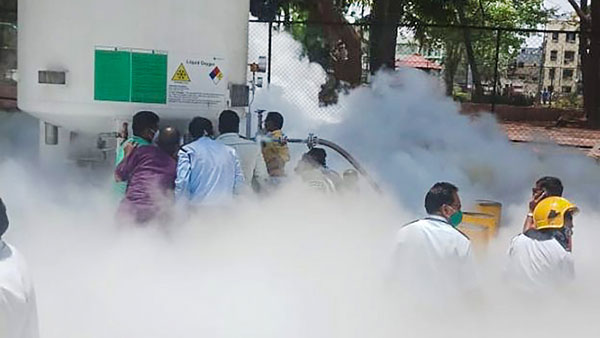 The ‘Nasik Hospital Oxygen Leakage’ incident was the deadliest to take place during the Corona crash. The accident took place in Maharashtra, where the corona had spread, and hence in Kovid Hospital. The death toll in an oxygen leakage incident at Dr Zakir Naik Municipal Hospital in Maharashtra’s Nashik district center has risen to 24.

Zakir Naik Hospital had 150 Kovid patients, 23 of whom were being treated on ventilator support and the rest on oxygen support, while a sudden gas leak at the hospital’s oxygen plant on Wednesday afternoon. Oxygen leak was revealed while replacing the storage tank. Twenty-two people were killed in the crash. There were 11 men and 11 women. While,

Nashik District Collector Suraj Mandhare told media that two other Kovid patients who were seriously ill after the oxygen leakage also died, bringing the total death toll to 24. The Maharashtra government has taken the incident very seriously and ordered a high-level inquiry. The government has announced compensation of Rs 5 lakh to the families of those killed in the oxygen leak.

Several leaders, including Indian Prime Minister Narendra Modi, have expressed shock and condolences to the families of the victims over the oxygen leakage tragedy at the Nashik Hospital. The Nashik District Collector said that it was deplorable that such an incident had taken place as the oxygen shortage in the original country was continuing and all matters would come out in the investigation.