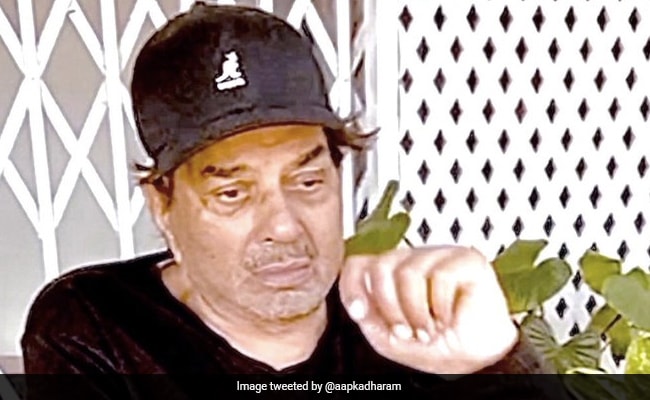 Dharmendra’s deleted tweet about the protest had the same photograph of him.

A week after he posted and quickly deleted a tweet referring to the ongoing farmers’ protest, Bollywood actor Dharmendra Deol, once opposed today, commented on the crisis and said the government needed to “do something fast. “to ease the pain of his” farmer brothers. ” .

“It hurts me a lot to see the suffering of my farmer brothers,” the 85-year-old former BJP MP from Bikaner, Rajasthan said again in a tweet.

It hurts me a lot to see the suffering of my farmer brothers. The government should do something fast. pic.twitter.com/WtaxdTZRg7

Thousands of farmers across the country, especially those in Punjab and Haryana, have protested in recent weeks against three central government farm laws passed in September, gaining the support of many political parties. Several rounds of talks with the central government have failed to break the deadlock, and farmers are seeking the complete repeal of all three ordinances.

Deol, popularly known as Dharmendra, was a BJP MP from 2004-2009, but has always wore his agricultural roots on his sleeve. Earlier this month, he had posted a similar tweet seeking a quick resolution to the problem. However, the tweet was apparently deleted after trolls attacked the actor.

Interestingly, the oldest tweet, partly in Hindi, had the same sullen photograph of himself that the actor posted today in his latest tweet.

Her son, Bollywood actor Sunny Deol, is a BJP MP from Gurdaspur, Punjab, a state that has been the center of the protest. Referring to the subject earlier this month, the actor took a rather evasive position. “I am with my party and the farmers and I will always be with the farmers. Our government is always thinking about the farmers …” he tweeted in Hindi.

Mr. Deol’s wife, Hema Malini, is also a member of the BJP and an MP for the Mathura constituency in Uttar Pradesh. She has also been silent on the issue, although a good portion of the protesting farmers are also from Uttar Pradesh.