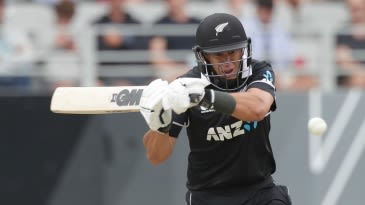 Ross Taylor has been eliminated from New Zealand’s T20I team for the series against Pakistan, while fast pitcher Lockie Ferguson has been ruled out with a back injury. The return of Kane Williamson, who is currently on paternity leave, and Trent Boult, who were off for the T20I against the West Indies, will be available only for the second and third games of the series along with Tim Southee, Kyle Jamieson and Daryl Mitchell. . which were also part of the test side.

Fast bowler Jacob Duffy has won his first call-up after impressing with his performances for Otago on the domestic tour and for New Zealand A. The 26-year-old finished as the second best wicketer at the Ford Trophy in early this year with 21 strikes in nine innings and picked up six wickets in two innings in the four-day game against West Indies A last week. Seamer Hamish Bennett, who played in the T20I against the West Indies, will also miss the T20I in Pakistan with an abdominal tear suffered in the third round of the Ford Trophy.

Mitchell Santner will once again lead the T20I team in the series opener at Eden Park, having done so in the rain-struck third T20I against the West Indies in Williamson’s absence, before taking his first break of the game since the CPL in August. Legspinners Ish Sodhi and Todd Astle will cover him.

Glenn Phillips and Devon Conway, who were involved in a record 181 position on third field in the second T20I against the West Indies less than fifteen days ago, are still part of the team. Seamer Blair Tickner, hitter Mark Chapman and all-rounder Doug Bracewell will only be part of the first T20I. Chapman will remain on hold in case Williamson needs to stay with his family longer than expected.

According to coach Gavin Larsen, Taylor, who made 38 and 9 in the T20I against the West Indies, is missing due to the “quality and form” of the rest of the team.

“It’s great to have the Kane and Trent class coming back to our T20 side after missing the West Indies series after their starring roles in the IPL in November,” Larsen said. “We were delighted that Glenn and Devon were able to use their opportunities so well in the previous series and we look forward to giving them a chance to back that up against a strong Pakistan T20 team.

“His inclusion and the return of Kane means we’ve dropped Ross Taylor. This was, as you imagine, a very difficult decision as Ross has been a consistent performer for us, but unfortunately we couldn’t find space in the squad for him. because of the quality and form of the other hitters. “

The T20Is will kick off three days after the conclusion of the second ongoing Test against the West Indies, with Auckland, Hamilton and Napier hosting the three matches on December 18, 20 and 22, respectively.