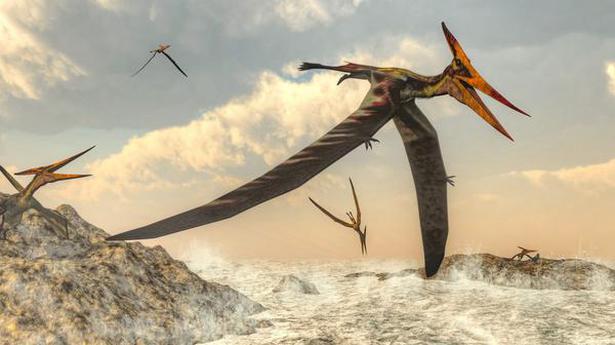 A little-known group of reptiles called lagerpetids appears to have been the evolutionary precursor to pterosaurs.

(Subscribe to Science For All, our weekly newsletter, where our goal is to eliminate the jargon of science and put the fun in. Click here).

Scientists may have solved one of paleontology’s enduring mysteries: the evolutionary origins of the flying reptiles called pterosaurs that ruled the skies at the same time that dinosaurs ruled the earth.

Researchers said Wednesday that a group of reptiles from the Triassic period called lagerpetidae, known from some partial skeletons from the United States, Argentina, Brazil and Madagascar, appears to have been the evolutionary precursor to pterosaurs.

Lagerpetids, which first appeared about 237 million years ago, were generally small and may have been insect-eating bipedal. They couldn’t fly. Pterosaurs became the first flying vertebrates on Earth, and birds and then bats appeared much later.

“The origin of pterosaurs has been one of the most enigmatic topics in paleontology since the first discovery of pterosaurs at the end of the 18th century,” said paleontologist Martín Ezcurra of the Argentine Museum of Natural Sciences in Buenos Aires, lead author of the study. published in the journal Nature.

The oldest known pterosaurs appear in the fossil record about 220 million years ago, with fully developed anatomies for flight, including wings formed by a membrane that extends from the ankles to an exceptionally elongated fourth toe.

By studying previously discovered and newly unearthed fossils using sophisticated scanning technology and three-dimensional modeling, the researchers identified at least 33 skeletal features that suggest an evolutionary link between lagerpetids and pterosaurs. These included the shape of the inner ear, brain box, and teeth, as well as similarities in the bones of the hand, leg, ankle, and pelvis.

“We show that lagerpetids are the closest known relatives of pterosaurs and bridge the anatomical gap between pterosaurs and other reptiles,” Ezcurra added.

An artist’s rendering of Dromomeron (foreground) and dinosaurs and associated relatives, based on fossils from Ghost Ranch, New Mexico. Illustration courtesy of Donna Braginetz.

Lagerpetids also appear to be closely related to dinosaurs, the researchers said. The oldest known dinosaur dates to about 233 million years ago. Pterosaurs disappeared 66 million years ago in the asteroid collision that also doomed the dinosaurs.

While they started out relatively small, pterosaurs eventually grew to enormous dimensions, with a wing span reaching 35 feet (10.7 meters).

“We’ve been studying how birds transformed their bodies to fly for the past 50 years and most of this was driven by extraordinary fossils of dinosaurs and early birds,” said Virginia Tech paleontologist and study co-author Sterling Nesbitt. “Pterosaurs have yet to experience this rebirth of understanding because we didn’t have the fossils.”