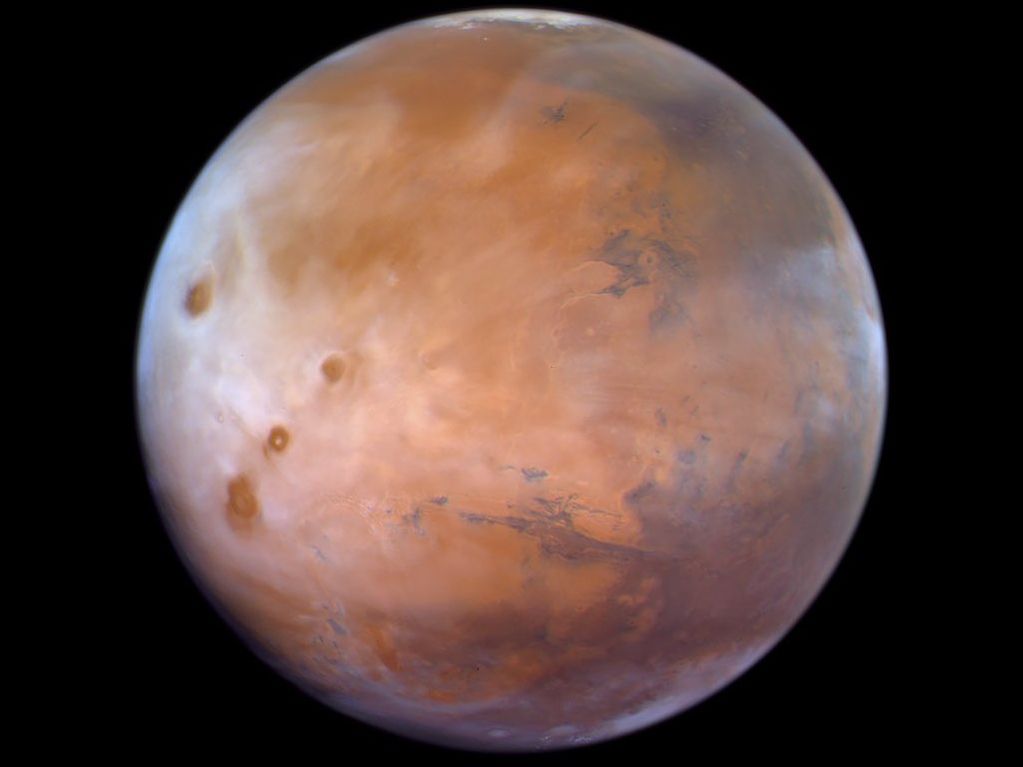 Sheikh Mohammed bin Rashid, Vice President and Ruler of Dubai, has shared a new picture of Mars taken by the Hope Probe.

He said Saturday that data that Hope had collected showed larger amounts of oxygen than expected on the Red Planet.

The UAE has also begun sharing the data it has acquired with scientific centers around the world.

The image was from the northern parts of the planet Mars.

Hope’s mission is to study the upper and lower atmosphere of the planet. The Emirates Mars Mission team will unveil more findings in the coming weeks.

The orbiter has also sent back thousands of images that help the scientific community understand more about the Martian surface.

The Data includes an innovative finding that there is more oxygen in the Martian atmosphere than expected.

The image shared on Saturday shows the spring season in the northern part of the planet, with the Montes Tharsis region home to three large shield volcanoes clearly visible on the left.

After going into orbit on February 9, the probe began to capture scientific data on the levels of gases present in the planet’s upper atmosphere. The gases include hydrogen, oxygen and carbon monoxide.

The first set of data was published online and is available for free download.

The latest findings show that atomic oxygen and carbon monoxide are more abundant in the atmosphere than thought.

The data show dramatic variations in concentrations of both gases.

“These observations have completely unexpected characteristics and we believe they will have far-reaching consequences for our current models of Martian atmosphere and our understanding of its behavior,” said Hessa Al Matroushi, the chief scientist at the Emirates Mission Mars.

“We simply did not envisage structures of this size and complexity.”

Existing data had shown that the planet’s atmosphere is very thin and stripped away, with oxygen and hydrogen escaping and making life impossible to exist.

Research collected by the Emirates Mars Mission will help build a stronger model of the planet’s atmosphere and its interaction with solar radiation.

It may also help scientists understand why and how Mars, which may have once supported ancient life, continues to lose its atmosphere.

The new observations also suggest unusual levels of atmospheric turbulence due to the high density of atomic oxygen.

“It was so unexpected that we initially thought the structures could be artifacts in the image, caused by light contamination of longer wavelengths that the instrument is designed to reject,” said Justin Deighan, deputy the mission’s science leader.

“We had expected to observe a relatively uniform emission of oxygen at 130.4 nanometers across the planet and yet here we are, facing unexpected variations of 50 per cent or more in brightness.

“The science team is currently refining their models to come up with a sound interpretation of these findings. It is very exciting to be challenged in this way. This is exactly the kind of science the mission was designed to pursue. ”

This image taken by Hope’s probe ultraviolet spectrometer (one of its three scientific instruments) shows sunlight reflecting off the stationary cloud of atomic hydrogen gas that surrounds the planet Mars. Sunlight can only be seen as a dark disk hidden inside the gas mist. The Emirates Mars Mission team said no other mission has made such recordings before.

The data will help scientists understand why and how Mars, which may have once supported ancient life, lost most of its atmosphere.

Three instruments on the spacecraft have made scientific data collection possible.

Hundreds of high-resolution images of the planet were taken by the exploratory imaging, using dedicated filters to help scientists learn about things like ice in the atmosphere, small water ice particles, ozone and dust storms.

Scientists with the Emirates Mars Mission team will share details of the latest findings during the Astronautical International Congress, which takes place in Dubai from October 25 to October 29.

The UAE became the first Arab country to send a probe to the planet March when Hope began to orbit the planet in February.

The mission is part of the UAE’s ambitious space and expansion program that this week announced its intention to visit Venus and explore seven asteroids in the Asteroid Strip.