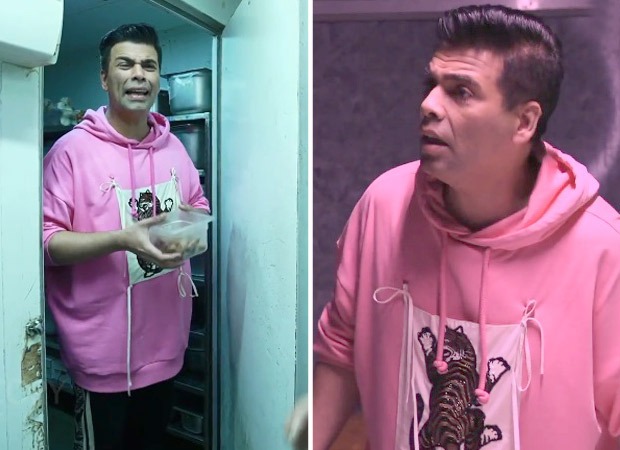 Have you ever wondered what it would be like to see your favorite celebrities on a cooking show. Well, Discovery + last week kicked off the Star Vs Food season with Kareena Kapoor Khan who was an incredible watch. The new celebrity cooking show features weekly episodes of stars setting themselves up against the challenge of cooking a meal for their loved ones under the supervision of a professional chef.

After Kareena, Karan Johar joins the star-studded lineup visiting his favorite Japanese restaurant Mizu Izakaya where Chef and Co-Owner of the restaurant Chef Lakhan Jethani teaches Johar how to make Katsu Curry and Sushi from the beginning. And let’s just say – if you miss Koffee With Karan and his over-the-top drama, this episode is for you.

“You have seen me everywhere – literally everywhere as I am almighty,” said Johar at the start of the episode. “But, there’s one room you haven’t seen me” – before he cuts people off and adds, “You haven’t seen me in a kitchen. I haven’t seen myself in the kitchen. “He begins his journey with his special way of chatting with the Chef before embarking on his culinary journey.

Chef Lakhan starts the task for Katsu Curry by asking Karan, finely chopped onions. But, Karan, who has never done it, immediately goes into panic mode – “I have never cut an onion in my life.” The filmmaker eventually learns it. Well, later on, putting onions in the pan ignites another level of response from him.

Well, in a way, some miss Koffee With Karan while many are content that it seems to be over forever. But, if you miss Karan’s snarky comments – it’s largely found throughout the episode of Star Vs Food. The unnecessary mention of ‘bed’, ‘spoon’, and everything but then again Karan we’re talking about can be avoided. You hear these kinds of “jokes” throughout the episode until the guests arrive.

MAKE A KARAN Cake For ROOHI AND YASH

During the episode, Karan mentions that he tried to bake a cake with the help of his people sometime during the pandemic last year, but it turned out, it didn’t go as planned. As he followed the recipe, he forgot to put baking powder. One of his friends had to order a cake in 2 hours as his children were looking forward to cooking their dad.

Chef Lakhan sends him to the pantry for fresh turmeric and his first response is ‘GARLIC?’ He sits down after a walk and searches for a while and goes through many levels of emotions as he could not find turmeric.

He really learns how to make his favorite food which he admits requires a lot of effort. Eventually, Chef Lakhan admits that Karan only gets 5/10 since he got tired easily but hopes he eventually inspired Johar to cook at home.

If you’re at a Japanese restaurant and you haven’t even tried sushi, what’s the point? The filmmaker gives his first try at rolling a sushi and well, the result is decent for sure.

While Kareena Kapoor Khan’s episode provided many fun moments, Karan Johar’s episode basically seems to go through a rollercoaster of emotions just to make a few dishes. All in all, Star Vs Food is a decent watch.