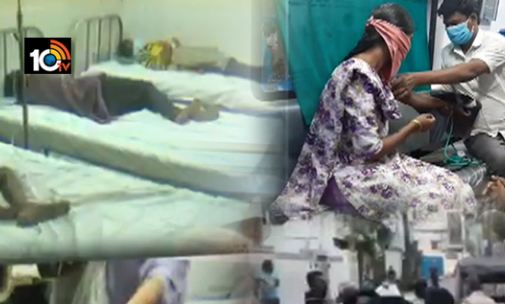 Strange disease in Eluru: An elusive disease that still plagues the people of Eluru. Hundreds of victims have already been hospitalized due to the disease. Two of the victims who were admitted to the hospital due to the disease and came to Vijayawada for better treatment died. Although the deceased Subbaravamma and Apparao were admitted to the hospital due to a strange disease, doctors say that the real cause of their death was different. Doctors said that Subbaravamma died with Corona and Apparao with a lung problem. With the death of these two, the number of those who died due to the strange disease of Eluru rose to three. The number of victims of the strange disease has risen to 609. So far 543 patients have been discharged. Currently 32 people are being treated at Eluru Government Hospital. Another 33 people are being treated at Guntur and Vijayawada government hospitals, paramedics said. On the other hand, experts from central medical teams and reputed institutes are working hard to find out the exact causes of the Eluru strange disease. Illness mainly due to drinking water .. or not? Focusing on whether. The cause of the Eluru strange disease that is causing a stir is not yet known. With this .. Aims doctors are doing more in-depth research on the strange disease. More blood samples are being collected from the victims and are being analyzed by the Delhi AIIMS. A total of 37 blood samples were tested. 21 samples were found to contain high doses of lead. The rest of the samples were found to contain heavy metals such as lead and nickel. Experts suspect that organochlorines may be present along with the heavy metals. AIMS doctors seek help from Central Forensic Science Laboratory in Delhi to test samples for organochlorine tests. In response, the CFSL sought written instructions from the Home Department. Written orders were received by CFSL on the initiative of MP GVL Narasimha Rao. This marked the beginning of CFSL’s research into organochlorine traces. Test results are expected by noon on Friday, December 11, 2020. The AP government has appointed a high-level committee to look into the origins of the strange disease. The Multidisciplinary Committee will work to study and make recommendations on disease prevention measures. The government has set up a high-level committee of 21 officials chaired by the state chief minister. It includes representatives from AIIMS, IICT, CCMB, NIN, WHO and officials from various departments. They will study the situation in Eluru.