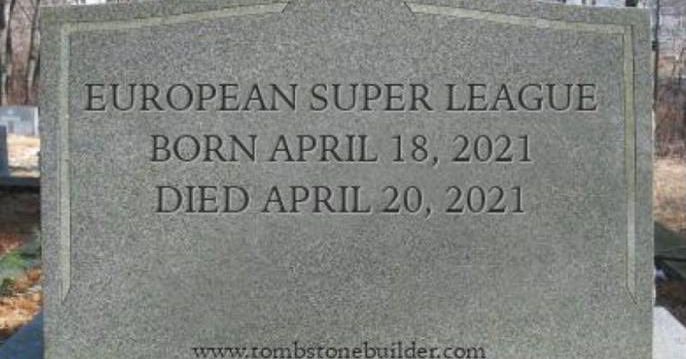 There is no better way to start an article than hyperbole and when the world of sports opens the door perfectly, it is hard to pass up the opportunity.

Football may have just witnessed the most dramatic and important 48-hour period in its history. After years of hints, rumors and heavy suggestion, 12 of Europe’s most powerful sides announced Superleague’s break-in in the middle of the night on Sunday. Despite the bizarre hour of its birth, the league received two days of condemnation from sports fandom as well as “moral giants” such as Paris Saint Germain, UEFA and an alliance of powerful national football associations. Scraping for TV bargains and a complete set of founding members, the SuperLeague died Wednesday with a mass exodus of clubs that have left only Real Madrid, Barcelona and Juventus stand at the time of writing.

No clear PR lines. No TV contracts lined up. Three presumed “founders” have no firm commitments. Total amateur work from participants and they deserve everything that comes to them.

Firmly in the midst of this maelstrom, the reputation of Real Madrid and Florentino Perez has had tremendous success. Not that social media has ever been the home of rational debate, but the name of “Perez” has been trending for two days, mostly filled with fans who want him to join his co-conspirators to resign while a small minority have chosen to support their hashtag Estamos contigo Presi (We’re with you Presi) make the rounds on Twitter since the fall of the Superleague.

Much like the Superleague itself, Florentino Perez is not the cackling Disney villain he will be making out over the next few months. Regardless of his diabolical execution, Real Madrid’s president’s face-level intentions with the Superleague were to break our corrupt and dirty rich men and executives into the sport and secure Real Madrid’s long-term financial future in the face of a devastating pandemic. His mistake was to believe that, in the face of problems the whole game suffers from, the rich were the real victims and that their inflated self-worth made them worthy of being the controlling force in the game.

In this sense, Real Madrid fans are not obliged to trust, let alone defend, Perez’s actions over the last 24 hours. He was not alone in thinking that the Superleague was a good idea, but no one put their public profile on the track for it as Perez did. He has been a staunch supporter of the idea for years, he announced all but his intention to seek a Senior pupil for sociology during the General Assembly in November, he was the first (and last) chairman of the league and was the only Superleague honcho to make an interview live on the subject.

Sure, she looks hot in the current climate but Perez is a very intelligent man and even a fool would have known, by giving Supereleague his reputation on the line, that he was also bargaining a club the club. Despite this clear fact, he never consulted the socios who are supposed to own the club about whether they felt comfortable with this arrangement. It could be argued that club members have no say in such matters, however, it seems that even a temperature check was not being done on how fans would feel about leading Superle Head into an illusion. Things have been like this for some time and are therefore unlikely to change, however, it has been a long time since Real Madrid’s “democratic” processes have been as much in focus as they have been in recent months. As well as the financial constraints of the social model, it may be necessary to think about how the club is run.

Real Madrid should not be the only soul-searching ones. Many talking heads over the past two days have predated the European Superintendent’s greed with how football has always been this way. One too many were remarkably comfortable with this issue before Sunday and one too many were happy to end all the arguments about the Superleague with that statement, perhaps as a silent comfort when they inevitably ended to watch. Despite the embarrassment of a constant reminder of how bad the game has been over the last century, I’m not going to shy away from the fact that I am, at best, ignorant of the issue or, at worst, callous to the condition of outside teams. myself.

One way or another, it was only until the problem came into my own backyard that I began to care about how sporty the love we love has gone. I can’t imagine speaking for myself in this, pick up any history book and you’ll immediately point out that humanity has needed an obvious issue to become something of a sick parody of itself before we feel the need to go to address it. Fans have, for the most part, rejected the idea of ​​Superleague, but, helping make sure it doesn’t happen is like escaping the frying pan and jumping into the fire.

The forces that run this game are indiscriminately broken. Just in recent years, they have stood idle while people die for their hosts at the World Cup and, as they allow bribes to dictate the previous guests, they allow the tournament to go on. Faced with an infectious pandemic that has killed 3 million people and affected the lives of billions, they still insist that local authorities jeopardize the welfare of fans by allowing them to return to stadiums this summer for the European championships just the tournament financial success. They offer no representation or protection for the most vulnerable elements of this sport, allow players to behave beyond the call of duty with virtually no authority protecting their interests and continue to line their pockets with scarce fan money pinging their radar.

Even now, after defeating the Superleague, the spirit of fair play and merit faces an immediate threat due to Switzerland’s new model for the Champions League. These issues are just something a fan of one of Europe’s most privileged clubs can think of and are likely to only scratch the surface. Fans and players have discovered their own worth over the last 48 hours, have a say in the image of this sport and, having so fiercely opposed Superleague, have an obligation to continue to fight for the values ​​that have been made it so important for them the last 48 hours.

As for Florentino Perez, he told El Chiringuito on Sunday / Monday that football was dying and that he was fine. Perhaps with some time for reflection, he might try to tackle that issue in a more altruistic way rather than the self-interested fantasy of being a European Superintendent.