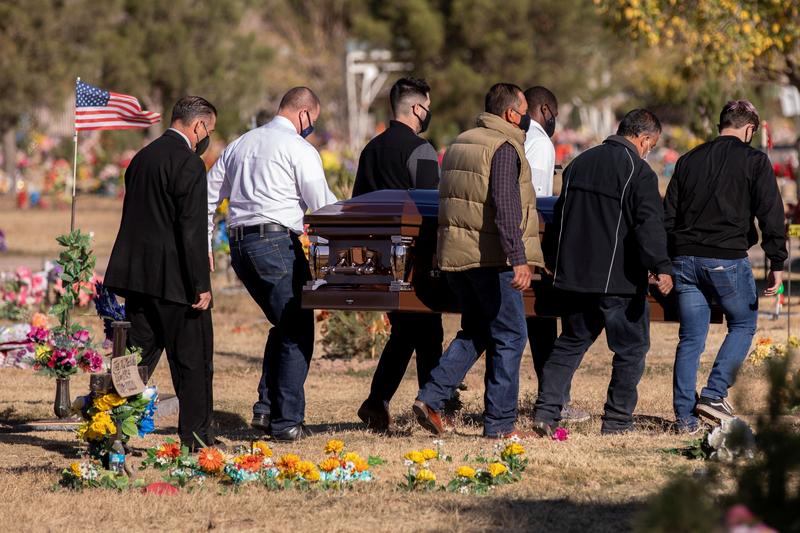 Last-minute preparations for the launch of the vaccine came as the death toll in the United States from the coronavirus pandemic approached 300,000 to date, ending weeks of sinisterly increasing infections and hospitalizations they have subjected health systems to the limit.

A further 2,902 deaths were reported in the US Thursday, a day after a record 3,253, a pace that is projected to continue for the next two to three months even as the distribution of available vaccine supplies increases. The process could start on Monday.

Moving at unprecedented speed, the US Food and Drug Administration (FDA) was on Friday about to approve the emergency use of the coronavirus vaccine developed by Pfizer Inc. with its German partner BioNTech.

“The FDA informed Pfizer that they intend to proceed toward an authorization for their vaccine,” Health and Human Services Secretary Alex Azar told ABC News on Friday.

“We will work with Pfizer to get them shipped so we can see people get vaccinated on Monday or Tuesday,” Azar said.

Britain, Bahrain and Canada have already approved the Pfizer vaccine, and the US advisory panel is due to review a second vaccine, from Moderna Inc, next week.

Other candidate vaccines are in the works as the United States prepares for a campaign evoking polio vaccines for children during the 1950s and 1960s.

Delivery companies United Parcel Service and FedEx Corp were ready to ship millions of doses across the country under contract with the federal government, giving the highest priority to vaccines in their planes and trucks.

The plans call for U.S. Marshals to provide security for COVID-19 vaccine shipments from manufacturing facilities to distribution sites, including acting as an escort for delivery trucks.

“This is unprecedented because it’s not just about logistics, it’s about making sure we earn the public’s trust, it’s about ensuring fairness,” de Blasio said at a press conference.

New York State expects to receive 346,000 doses of the Moderna vaccine the week of December 21, in addition to the 170,000 doses from Pfizer due to arrive this weekend, Gov. Andrew Cuomo said at a news conference.

But with COVID-19 hospitalizations rising across the state, Cuomo announced that indoor dining in New York City, which resumed just over two months ago, will cease starting Monday.

The Indiana University Health Center, one of the first hospitals designated to administer the vaccine, planned to rehearse its vaccination procedures on Friday, with pharmacists, nurses and doctors participating in drills to store, transport and administer actual injections to patients. .

“We want to make sure we are perfectly prepared and open with a bang,” Kristen Kelley, director of infection prevention at IU Health, told Reuters.

Elsewhere, many healthcare workers were struggling just to keep up with a staggering number of cases while facing shortages of personnel and personal protective equipment (PPE), including surgical gloves, gowns, and rapid diagnostic test kits.

“We don’t have enough. They are not readily available, they take too long and the supply chain is not running consistently, ”Konnie Martin, executive director of San Luis Valley Health, which runs the Regional Medical Center in Alamosa, Colorado.

The Alamosa hospital serves six mostly rural counties in southern Colorado that are home to about 50,000 residents. The next closest comparable hospital is 193 km (120 miles) away.

Healthcare workers are expected to be designated first in line for vaccines.

But any American who wants a vaccine should be able to get it in May or June, US Under Secretary of Health Brett Giroir told Fox News on Friday.

States will determine who gets the vaccine first and is likely to target healthcare workers, followed by people in long-term care facilities, the elderly, and people with chronic conditions and first responders, Giroir said.

There is cause for concern about Americans’ skepticism of vaccines, with only 61% saying they are willing to get vaccinated, according to a Reuters / Ipsos poll.

Meanwhile, the grim statistics continue to pile up as more than 200,000 cases were recorded in the United States per day for four consecutive days, with another 220,815 cases on Thursday, according to a Reuters tally of official data.

The United States has reported 15.6 million known infections as of Thursday.

COVID-related deaths in the U.S. are projected to reach 502,000 by April 1, according to an influential model from the University of Washington Institute for Health Assessment and Metrics.

The institute revised that number to roughly 37,000 on Thursday with the release of more detailed information on the vaccine and other factors.