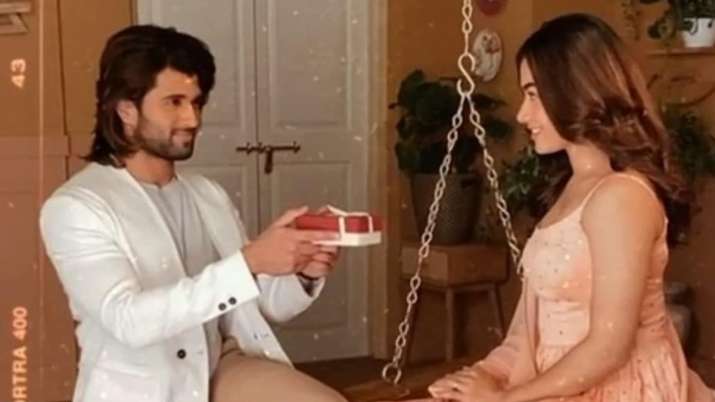 Southern actors Vijay Deverakonda and Rashmika Mandanna have already impressed their fans with their chemistry in two films – Geetha Govindam and Dear Comrade. Well now, the duo set the screens on fire again after a video of their latest TV ad for a popular soap brand went viral on social media. Rashmika and Vijay, who recently became the brand shot ambassadors for the TVC recently at a private studio in Mumbai. Soon, a clip from the shoot went crazily viral and showed Vijay sitting down on his knees and giving Rashmika a box. The 31-year-old actor looks romantic in the eyes of the 25-year-old actress leaving fans going gaga over their chemistry.

Vijay opted for the ad shoot white jacket and beige colored trousers while Rashmika looked beautiful in her floral pastel slip dress. Check out the BTS video of Rashmika and Vijay here:

The two actors are not only known for their professional relationship but also for the rumors claiming that they both have been dating. However, the actress during an Instagram Q&A with fans opened up about her relationship status and wrote, “This is for everyone who still puts my name with everyone I know .. I am single, and I love it … here also tells me the cribs about being single … trust me when you start having fun being single … your standards are for your love still going high. “

As for the work, Rashmika was recently featured in Badshah’s song ‘Top Tucker.’ He is next seen opposite Siddharth Malhotra in ‘Mission Majnu.’ Not only this, but the actress even has her second Bollywood project ‘Goodbye’ which is directed by Vikas Bahl and starred Amitabh Bachchan.

While for Vijay, his next screen appearance will be in a bilingual Telugu-Hindi film, Liger opposite Ananya Panday. The film is directed by Puri Jag assignment and will be distributed by Karan Johar and Apoorva Mehta.