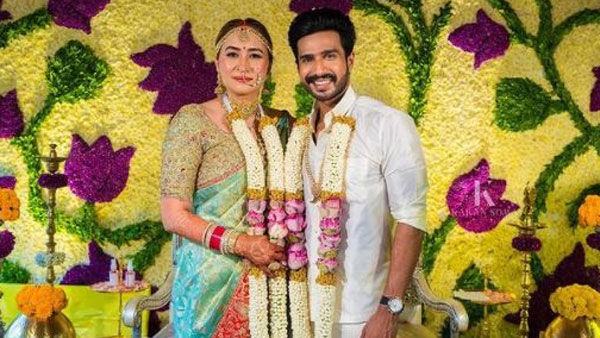 Recently, hero Vishnu Vishal and Jwala Gutta announced the announcement of their engagement ceremony to bolster the news of their marriage. Officially responded to the wedding by saying they would be getting married soon. Jwala Gutta and Vishnu revealed that they were unable to invite more guests due to Kovid rules and circumstances.

Payal Rajput showing off her belly .. Sex appeal in another range

In the presence of family members

The Jwala and Vishnu wedding ceremonies in Hyderabad were attended by a very small number of people. Following the family traditions, Vishnu Vishal placed a triangle around Jwala’s neck. Friends and acquaintances congratulated the two on the occasion.

How to make love in 30 days heroine photoshoot viral .. with the newest beauties

As part of the wedding ceremony, a Mehndi and Haldi function was held on April 21 at Jwala House. Photos related to the Haldi celebrations went viral on social media. In the midst of the festivities the family members bathed in the yellow of the flame shit. On this occasion Jwala appeared happy with his family members.

Mehndi ceremonies related to Jwala and Vishnu Vishal were also celebrated. When very few friends were present .. the stage was filled with Ghana bhajana. They danced to the songs of the movie. Photos of the pre-wedding ceremony have been widely circulated on Instagram and Twitter.

Jwala, about the personal life of Vishnu

This is the second marriage of Jwala Gutta and Vishnu Vishal. He fell in love with his childhood friend Rajani Natarajan and married her in the past. They have a son named Arya. The couple divorced legally in 2018 for personal reasons. Jwala Gutta had a love marriage with badminton player Chetan Anand. The two parted ways due to personal differences. Jwala and Vishal have been dating since then when they met at Vishal’s sister’s wedding.