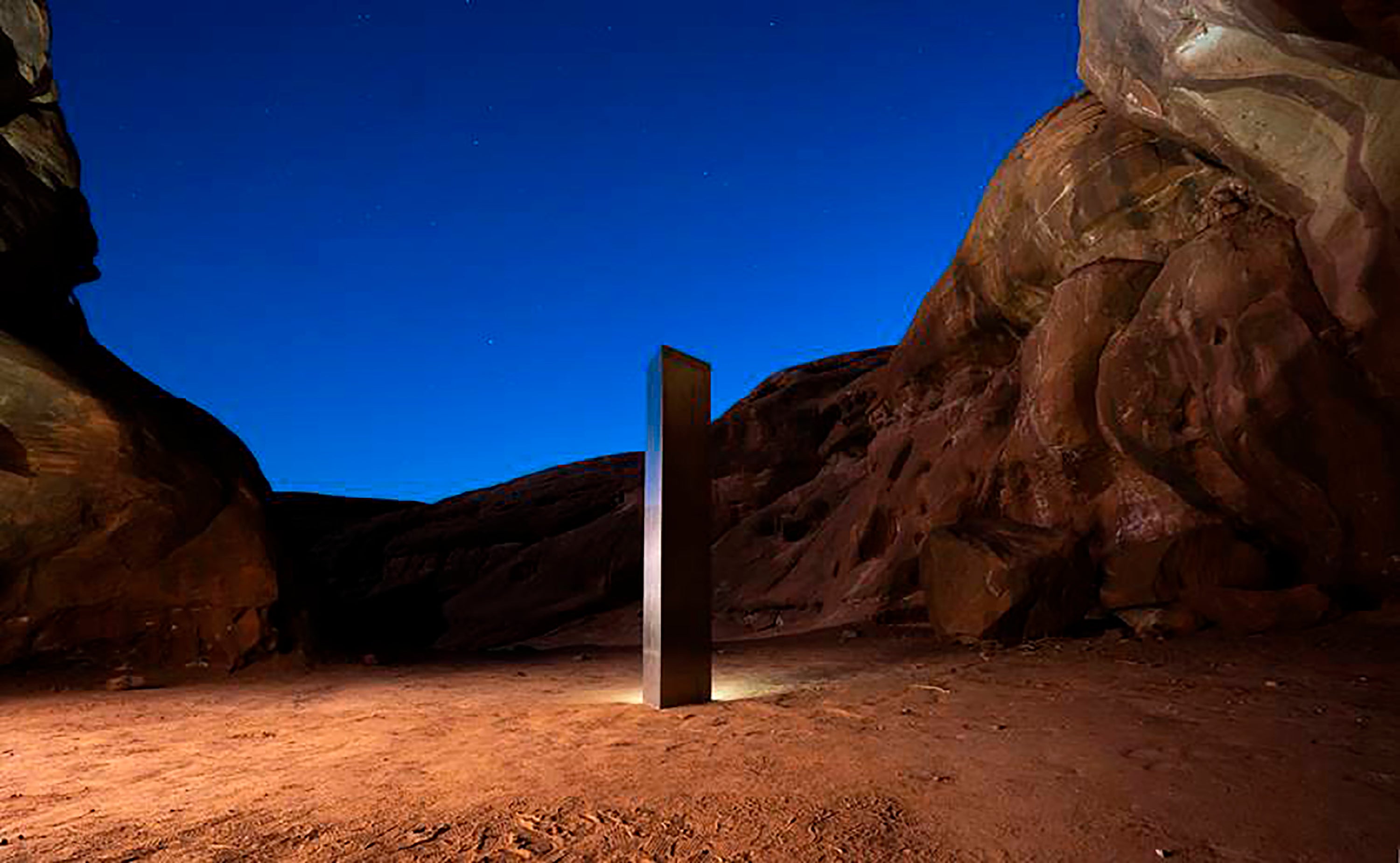 Monoliths have appeared in surprising places over the past few weeks, including an American desert, a British beach, and a Belgian countryside.

Several of these tall, bright pillars have now been found at sites around the world without warning or explanation since mid-November.

The first was discovered in the US, when a helicopter crew flying over a remote part of the Utah desert counting sheep saw a strange statue below.

The structure disappeared several days after it was first seen near the Petrodava Dacian Fortress, a local archaeological landmark in the north of the country of Neamt.

A metal monolith also mysteriously appeared in the middle of a field in Baasrode, Belgium, in December.

Spain, Germany and Colombia have also seen strange tall structures arise since the first monolith was found in the US.

Back in the UK, one with the words “Not Banksy” also appeared at the top of Glastonbury Tor.

As mystery shrouded the first monoliths, an anonymous collective called The Most Famous Artist took credit for those from Utah and California, and is selling several replicas for $ 45,000 (£ 34,000) each.

However, when asked about the structure of the Isle of Wight, he said: “The monolith is out of my control at the moment. Good luck to all the hard-working aliens around the world to spread the myth. “

Explaining his choice of location, Tom Dunford, 29, told the BBC: “If the aliens came down, I think they would go to the safest place which is the Isle of Wight on Level 1 [Covid restrictions]. “

The structures have prompted comparisons to the movie 2001: A Space Odyssey, where an alien monolith is a recurring symbol that appears to play a role in the unfolding of human evolution.

Bret Hutchings, a helicopter pilot who first saw the Utah monolith, told local news station KSLTV that he thought the structures might be by “a new wave artist” or someone who was a fan of the movie from Stanley Kubrick.

A monolith appeared and disappeared from a Utah desert in November

Speaking about the Romanian monolith, Piatra Neamt Mayor Andrei Carabelea wrote on Facebook: “There is no reason to panic for those who think that there is still life in the universe.”

“I guess some cheeky and terrible alien teenagers left home with their parents’ UFO and started planting metal monoliths all over the world,” the mayor said. “First in Utah and then in Piatra Neamt. I am honored that they have chosen our city. “

Speculation also followed the disappearance of the monoliths.

Authorities said the visitors razed the plants with their cars and left behind human waste.

Meanwhile, authorities in the Californian city of Atascadero said its monolith had been toppled by a group of youths who traveled five hours in the middle of the night to remove it.

“It bothers us that these young people felt the need to drive five hours to enter our community and destroy the monolith,” said Heather Moreno, the local mayor. “The monolith was something unique and fun at a stressful time.”