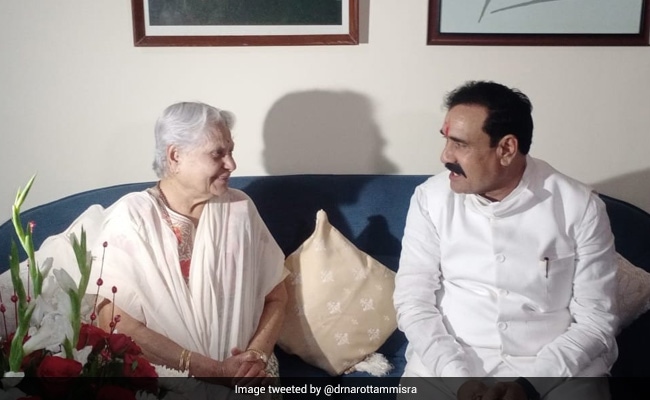 A day after the convoy of BJP National President JP Nadda was attacked in West Bengal, Madhya Pradesh Interior Minister Narottam Mishra said on Friday that Bengali people living in Bhopal and elsewhere will be urged. of the state to call on the people of Bengal to overthrow Mamata. Banerjee Government. To show that he was serious, he met superstar Amitabh Bachchan’s mother-in-law Indira Bhaduri in Bhopal.

“The government of Nirmamta Didi (Cruel Didi) has turned the glorious state of West Bengal into a lawless state. The attack on the national president of the BJP, JP Nadda, and the convoy of the national secretary general Kailash Vijayvargiya in Bengal, is reprehensible and it says a lot about anarchy in Bengal. ” he said.

“The Bengali population has a significant presence in many parts of MP, including Bhopal. During the refugee crisis in the past, large numbers of Bengalis stayed in MP. Even during the COVID-19 shutdown, large numbers of workers Bengali migrants who were working in MP were sent back to their home state through special transportation arrangements, “said Mishra.

Mr. Mishra further said: “I will appeal to all Bengalis living in MP to urge their population in Bengal to expel the Bengal government of the cruel and corrupt Nirmamta didi.”

A few days ago, the BJP had rounded up Narottam Mishra, its problem solver in Madhya Pradesh, for the Bengal elections and assigned him the responsibility of 48 seats in the state assembly.

He recently went on a four-day tour of Bardhman and the surrounding districts. Mishra, who had been active during the Uttar Pradesh assembly elections in Bundelkhand in 2017 and then Gujarat, is the third leader of Madhya Pradesh after Kailash Vijayavargiya, the BJP’s West Bengal head, and the former organizing general secretary of the MP, Arvind Menon, who has been entrusted with significant responsibility by the party.